..Steven Messham  said ” After seeing a picture in the past hour of the individual concerned, this is not the person I identified by photograph presented to me by the police in the early 1990s, who told me the man in the photograph was Lord McAlpine.”

It was the Police who led Steven Messham to believe  the man who abused him was Lord McAlpine. 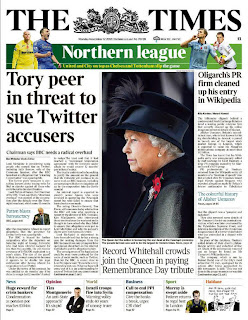 According to Messham, the source of the allegations was not himself, but the North Wales Police in 1990.  The Police told him the picture he had of a man abusing boys was Lord Alistair McAlpine.   Last week, the Police ‘untold him’, and made it clear they were entirely mistaken in their former opinion that the man had been Lord Alistair McAlpine.  At least, they showed him a picture which proved that their earlier opinion had been wrong.
The original identifying pictures had been destroyed under a court order.
EXTRACT from Justice Denied.
On the 8th of November the Mirror reported that:-   “Photographs of men abusing boys in the North Wales paedophile scandal were deliberately destroyed by the authorities. Sian Griffiths worked for Clwyd Council in the inquiry office on the 1994 Jillings and six years later on the Waterhouse inquiry which looked into the systematic abuse at the children’s homes.
She told ITV News that victim Steve Messham’s photos of alleged abuse were ordered to be destroyed.
Mr Messham says photos captured lots of men raping boys, including a prominent Conservative figure he accuses of abusing him.
He says he could see men’s faces clearly, but the police said they could not identify them from the pictures.
Ms Griffiths was asked: “Messham talked about photos that he had of abuse taking place. Do you know what happened to them?”
“We were supplied with copies of court documents…there was an order made for the book of photos to be destroyed.
“So Messham’s photos of alleged abuse…were destroyed?
“They were. Well that’s what’s in court papers – official documents.”
That could have been vital evidence?
“It could. Yes.”
http://www.mirror.co.uk/news/uk-news/north-wales-paedophile-scandal-photographic-1426356


Jo Richards ‏@JoRichardsKent
@SkyNews He needs to sue the original source of information that named “McAlpine” as a child abuser; THE POLICE! http://google-law.blogspot.co.uk/2012/11/mcalpine-and-north-wales-child-abuse.html?m=1 …
Details

‘In his letter, Simon documents Scallywag’s investigation into the North Wales Child Abuse scandal and the tragic cover-up by the Courts and the Establishment.
Whilst the Police stole the affidavits the abused children had made, naming their high profile abusers, the notes of the interviews were kept by investigator Andrea Davison only to be seized by the Derby and North Wales Police in January 2010.’
TAP – The suppression of evidence has been going on a long time, it seems.
Chris Spivey –
Lord McAlpine (Former treasurer of the conservative party)
He is known to the police in the UK and abroad, for sexually abusing young boys, including using a coffin to put the boy in, then they simulate burying him by sprinkling gravel on the top of the coffin, the child is screaming with terror and will do whatever he is told due to being so scared of being put in the coffin again. This person is alleged to have murdered at least 2 boys and buried their bodies on his estate. I got this information from a police officer who was involved in investigating McAlpine, and he is certain that he has committed murder several times, but he is too well protected to get him.
He has been named time and time again in N. Wales Enquiry into child abuse, yet he still enjoys total freedom to abuse and kill young children (yes, that’s right, kill children).
His sordid past is so depraved it beggar’s belief. There is a video tape hidden at the moment which shows him with two other child sexual abusers, torturing and raping young boys. The film was made in Wales. A very well-known investigative programme was loaned a copy in order that the story could be revealed and the children could finally get some justice and some peace. What a pity the company decided not to run the story, even though one of the women who watched it admitted to having to leave the room to be sick after only a couple of minutes.
There is a lot more to the abuse side of this case, but as I am still investigating this I cannot reveal any more at this time. However, I would like to know what happened to almost 20 million pounds of Conservative Party funds which I understand are still in an offshore account controlled by him and former Prime Minister, Margaret Thatcher. I would also like to ask the former Prime Minister why she stood up for McAlpine when information was passed to her by the Security Services in relation to McAlpine, and it was only after a large amount of pressure was put on her that she removed him from his post before information leaked out.

COMMENT –  Sir Alfred Mc Gangsta, that odious family made their money out of suffering, especially during WW2 when they were allowed the massively lucrative contracts for defense work, fortifications and repairs from Lufwaffe activity. Even back then they must have had connections to the underworld running the country.