And I was right!  According to Kerry Cassidy. 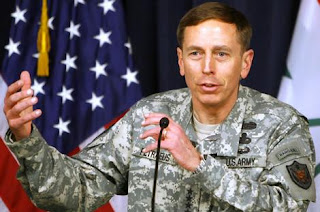 General david Petraeus, former head of the CIA.
Has he discovered who the real enemies are?
His own President, and the people who control him behind the scenes.

THE REAL STORY BEHIND PATRAEUS LINKED TO ATTEMPTED COUP AND BENGHAZI

Tuesday, 13 November 2012 10:51
Written by Kerry Cassidy
For those who are wondering about the real story behind the Patraeus affair, here is a completely different angle:

General Petraeus has been and remains personal friends of Paula Broadwell and her husband for over 20 years.
Broadwell was trying to protect General Petraeus and Ambassador Stevens from an FBI Division 5 Israeli Mossad instigated email hacking attack against General Petraeus and Stevens as Petraeus and Stevens and other patriotic members of the U.S. military were compiling “smoking gun evidence” concerning the criminal money laundering activity of the Bush-Clinton-Cheney Crime Family Syndicate’s Omega Fund.
Note: The Omega Fund has accrued massive profits from the illegal rigging of the LIBOR rate tied to Barclays Bank of England, UBS Switzerland and Citibank of New York.” — Tom Heneghan http://www.myspace.com/tom_heneghan_intel/blog

As we have reported in previous intelligence briefings, Ambassador Stevens was in possession of the December of 2001 Osama bin Laden aka 9/11 patsy and CIA employee Tim Osman’s death certificate.
Stevens also was in possession of financial records regarding the money laundry activities of the Bush-Clinton-Cheney Crime Family Syndicate administered Omega Fund, which was involved in launderingWanta-Reagan-Mitterrand Protocol Funds through nine (9) major U.S. banking institutions.
Again, it is important to remember that the night of the Benghazi attacks massive volatility took place in gold, silver and crude oil futures in which billions of dollars were rearranged and disguised in illegal cross-collateralized derivatives tied to Citibank and the London LIFFE Exchange.’–Tom Heneghan  http://www.stewwebb.com/IMF_Protocol_Implementation_Continues_20121111.htm

This statement from a previous intel report by Heneghan sums up the link between this takedown of Patraeus just before he is due to testify regarding the Benghazi incident:

Petraeus was ready to finger current dysfunctional U.S. Secretary of State, loser Hillary RodenhurstClinton for ordering a U.S. military stand down as U.S. Libyan Ambassador Christopher Stevens was being assassinated by bought and paid for U.S. government provocateurs, as well as the rogue U.S. CIA data base aka Al Qaeda. — Tom Heneghan http://www.stewwebb.com/IMF_Protocol_Implementation_Continues_20121111.htm

To add to the complexity of what is really going on, this MSNBC article reveals that Broadwell is actually an agent…

The new information offers clues about how federal investigators could connect a handful of anonymous emails to Broadwell, a trained intelligence officer who spent years working with some of the most secretive agencies in the world. –NBC News article http://openchannel.nbcnews.com/_news/2012/11/12/15119872-emails-on-coming-and-goings-of-petraeus-other-military-officials-escalated-fbi-concerns?lite

If this is the case, then Broadwell’s role is much more than that of a simple “biographer”.  What all of the above points to is a war with the Bush Cabal from within our government that now reaches into the offices of the President, Secretary of State and Attorney General. It also raises the possibility that there is a widening of the net around the recent reported  “coup” that resulted in:

General Petraeus’s toppling follows similar attacks by the Obama regime in the past 3 weeks that has seen the unprecedented ouster of many top US Military leaders including Rear Admiral Charles M. Gaouette, US Army General Carter Ham, Brigadier General Jeffery A. Sinclair, and US Navy Commander Joseph E. Darlak, all of whom we had previously reported on in our reports “Obama Coup Plot Slams Into Russia” and “Obama Fires Top Admiral As Coup Plot Fears Grows.” http://www.eutimes.net/2012/11/obama-topples-top-coup-leader-after-washington-gunbattle/

The focus on the so-called scandal of an extramarital affair by Patraeus, is a news smear tactic to take eyes away from the real battle going on in Washington DC.  The American people have no idea that a battle is raging to takeover the government by a least one group of the military.  What their agenda is and whether they will be successful is unclear.
However, it appears that the Bush Cabal is facing a challenge to power coming from within high levels of the military who are working in conjunction with a portion of the CIA and perhaps others.   The media blitz is the way the Bush cabal is fighting back.
This battle being fought in the public arena between the two sides is one aimed at hiding behind character assasination attacks in order to ward off real investigation into the deaths of Americans in Benghazi, revelations about Libor, the Omega Fund and much much more…
Question:  Were Patraeus and Ambassador Stevens members of a very strong and substantial group working to take down the Bush Cabal?  If so, what are their true objectives and alignments?
As this drama moves forward be aware that the players on both sides are coming forward and taking stands in the public arena.  You will know who belongs to which side or at least have a key to their allegiances by what roles they play… and the statements they make to the Press.  If only the Press were really interested in revealing the truth and the bigger story beyond the superficial red herrings they chose to follow… always involving sex and scandal as oppoesed to reporting the breakdown of the U.S., regime change and where this is all leading.

Add to that – Ben Fulford’s take……which seems fanciful to me.

The Dragon family and governments of the non-Western world acted decisively to get Barak Obama re-elected as president because a Romney victory would have meant World War 3, according to multiple sources.
Obama was cut off of his election finances by the Pope and the Queen three weeks before the election and would have lost if the Dragon family and others did not step in and finance him, according to CIA and Asian government sources. Obama returned the favor by complying to a request to purge Bush/Nazi operatives from the government and the military, the sources say.
That is why Timothy Geithner, Hillary Clinton, Eric Holder and other bush operatives were fired. The purge at the pentagon and agencies included CIA Chief David Petraeus, Rear Admiral Charles M.
Gaouette, US Army General Carter Ham, Brigadier General Jeffery A. Sinclair, and US Navy Commander Joseph E. Darlak, according to CIA and other agency sources.
Obama now has a totally different set of handlers and teleprompter script writers than he did in his first term.

TAP  is it really so easy to see off the Bush’s?  Obama was a Bush/CIA agent anyway.  I just feel there is a lot more to the story, but exactly what, I couldn’t say.

Petraeus was unfaithful to Israel. He said Israel was a liability to the USA.
This is unacceptable. The Jewish state had to have its revenge. It will do whatever is necessary, whether it is blackmailing American leaders or murdering Palestinians.
http://www.gilad.co.uk/writing…
The Tap Blog is a collective of like-minded researchers and writers who’ve joined forces to distribute information and voice opinions avoided by the world’s media.