TAP – The Zionists set up and control Hamas, as well as Israel.  As usual they control both sides and create all the conflict.  The ordinary people on all sides never want war.

Police were forced to shut Whitehall in central London on Friday afternoon after a man climbed on top of a statue and took all his clothes off.
The unnamed nude man straddled a statue of a horse ridden by Prince George, a former Duke of Cambridge and field marshall, at the Trafalgar Square-end of the road. Initial reports had suggested the man was making a one man protest about the Palestinians naked in front of the Israeli military onslaught, and the military assistance given by Britian and the USA to this genocide.
Whitehall runs from Trafalgar Square to Parliament and is the site of many government departments including the Ministry of Defence and connects with Downing Street.
A police officer at the scene told the Huffington Post UK that the man climbed up the statue fully clothed, then proceeded to take them off. A bystander said: “I can’t believe they’ve cordoned off the whole street for one naked man, it’s ridiculous!”.
The man could be seen adopting a variety of poses on the statue, which is of Prince George, the Duke of Cambridge.
At times he was balancing precariously on the duke’s head with both arms outstretched.
A Metropolitan Police spokesman said: “Police were called shortly after midday to reports of a man who had climbed on a statue in Whitehall, near the junction with Horse Guards Avenue.
“Officers are on scene and are attempting to engage the man in dialogue, with a view to bringing the incident to a peaceful and successful conclusion.”
A spokesman said it looked like an anti-war protest as a photographer from Doctors against racism was led away by police.
DR PATEL 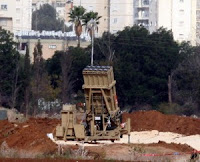 On Monday, Israel gave Hamas 36 hours to ceasefire before the Zionist nation would step up their attacks. Israel demands that Hamas stop firing rockets at their targets in Israel for “several years.” The nation also demands that no more weapons be smuggled into Gaza as part of a six-part proposal coming out of negotiations with the Israeli government and Hamas in Cairo.

Israeli missile targeting in Gaza have destroyed children and families without remorse; other than to admit that they hit a residence that resulted in the deaths of 11 civilians with four of them being children.

It is confirmed that Israel initiated this attack on Hamas with the targeted assassination of Ahmed Jardari, Hamas military leader. This action began Operation Pilar of Cloud, which references a “carefully planned military endeavor.”

While Ehud Barack, Israeli Defense Minister contends that Palestine has committed acts of aggression that resulted in military escalation that the “provocations we have suffered and the firing of rockets to the southern settlements within Israel have forced us to take this action. I want to make clear that Israeli citizens will not suffer such actions. The targets are to hit the rockets and to harm the organization of Hamas.”
To defend itself against Hamas, Israel is readying 30,000 reserve soldiers in an intended ground invasion of Gaza.

Turkish Prime Minister Tayyip Erdogan, speaking at the Eurasian Islamic Council conference, stated that the Zionist regime controlling the Israeli government is committing terroristic acts against Muslims. Erdogan said: “Those who associate Islam with terrorism close their eyes in the face of mass killing of Muslims, turn their heads from the massacre of children in Gaza. For this reason, I say that Israel is a terrorist state, and its acts are terrorist acts.”

The Iron Dome missile defense system is publicly slated as a “shield” that is being used to stop rockets shot from Gaza and averting Israeli targets from being hit. Its accuracy rate is at an alarming 90%; up from 75% in 2011. The convenient attack on Gaza has allowed Israel to test this new microwave technology against the Arab people of Palestine.

The Rafael Advanced Defense Systems, along with three other Israeli corporations came together to build this weapon of mass destruction. The US funded the creation of the Iron Dome to the tune of $310 million and counting with another $610 million being sent to Israel for the next 3 years.

Robert Powel, Middle East analyst for the Economist Intelligence Unit, explains that the Iron Dome became operational in 2011. The public knowledge f this weapon is that it will block short-range rockets that are normally difficult to intercept. 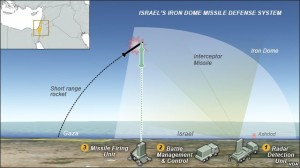 Boeing’s Phantom works has brought the Counter – Electronics High Power Microwave Advanced Missile Project (CHAMP) which is being tested in the Utah desert at the Utah Test and Training Range with assistance of the Hill Air Force Base. It is a technology that will allow governmental defense authorities to use beams of microwave technology to destroy targets without causing “collateral damage”.

CHAMP emits bursts of high-powered energy that not only knocks out electronic subsystems but also directs selective high-frequency radio waves that can strike multiple targets in a single session.

Directed – energy weapons (DEW) emit energy aimed in the direction of a target by transferring energy into a directed beam. This energy could be:

Microwave guns that are sanctioned, which use DEW against their targets includes:

-Active Denial System – a millimeter wave source that heats the water in the target’s skin and thus causes incapacitating pain.

-Vigilant Eagle – an airport defense system that directs high-frequency microwaves towards any projectile that is fired at anaircraft.

Richard W. Ziolkowski, engineer with the Research Division of the Lawrence Livermore National Laboratory, confirmed in 1988 that “electromagnetic directed – energy pulse train solutions of Maxwell’s equations have been obtained.”

In the 1990’s, the US government patented an electromagnetic, directed energy pulse launcher that utilizes Maxwell’s equations and scaler wave equations to “[produce] localized pulses of wave energy such as electromagnetic or acoustic energy which propagate over long distances without divergence.”

Globalist propaganda would have the public believe that the US Military Industrial Complex have not been successful in creating a weapon of high – power microwave technology. However, it has been evidenced by research conducted by Dr. Judy Wood, that we have seen the use of this technology used in a beta-test against the American people 11 years ago.

3 Responses to “Help Palestine (what’s left of it). Get your kit off.”