Another Greek journalist was arrested after threatening to expose damaging information about the country’s economy. This move comes in amid public protests against government media censorship following two high-profile cases.
Facing public discontent and mass protests, Greece’s government has been curtailing free speech and implementing media censorship, as parliament tries to pass new harsh austerity measures in order to qualify for new US$40 billion of EU bailout money.
Last night Spiros Karatzaferis, a Greek television journalist, was arrested after threatening to expose damaging allegations about the country’s economy. He received this information from the hacker group Anonymous and claimed prove that the Greek deficit, which forced the embattled country to seek bailouts, was fraudulent.
http://rt.com/news/greece-government-censorship-media-732/ 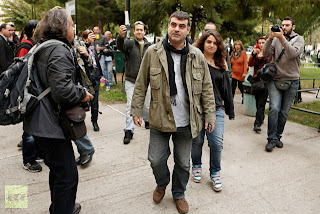 Kostas Vaxevanis
Greece’s government has been curtailing free speech and implementing media censorship, as parliament tries to pass new harsh austerity measures in order to qualify for new US$40 billion of EU bailout money.
Last night Spiros Karatzaferis, a Greek television journalist, was arrested after threatening to expose damaging allegations about the country’s economy. He received this information from the hacker group Anonymous and claimed prove that the Greek deficit, which forced the embattled country to seek bailouts, was fraudulent.
Karatzaferis told the Greek Reporter that he was arrested not for possessing the information, but on an unrelated case dealing with libel, after he accused judges of trying to form a para-state outside the government.
This came a few days after another Greek investigative journalist, Kostas Vaxevanis, was arrested and now faces up to a year in prison with a $38,000 fine for allegedly breaching data privacy laws.
His crime was in publishing the so-called Lagarde list, containing the names of 2,059 Greek account holders of HSBC’s Swiss bank. He is to appear in court on Thursday.
The list was initially stolen by a bank employee in 2007 and later passed on to then-Finance Minister George Papaconstantinou in 2010.
After the government failed to do anything for two years, Vaxevanis finally published the list in his Hot Docs magazine last week and was immediately arrested.
“There is tension between government and journalists,” Greek freelance journalist Eirini Zarkadoula told RT. “Many people are saying the finance minister should be arrested and not the journalist who revealed the truth.”
Another high-profile case involved two ERT presenters Marilena Katsimi and Costas Arvanitis, who were suspended“indefinitely” after they criticized right-wing Interior Minister Nikos Dendias.
Journalists throughout Greece have staged a wave of strikes, condemning the government for censorship. They also announced a 48-hour protest to battle the curtailment of freedom of speech.
Sociologist Panagiotis Sotiris believes the crackdown on the media reveals much deeper internal problems.
“If we combine government attacks and the fact that major media outlets in Greece are run by big corporations you have a problem when it concerns information. They want to create a set atmosphere that there must be things that should not be made public,” he told RT.
Greece never used to have investigations and journalists’ arrests before, a journalist for the Electeros Typos, Manolis Kostidis, told RT.
“We used to have free press,” he said. “Governments are trying to manipulate the media. Some people see it as a message to the media to stop criticizing the government.”
Unions announced they will join journalists and strike to battle government censorship and new budget cuts the government is trying to push forward in exchange for new bailout money.

Public discontent with the government was reignited when, in exchange for rescue loans from international bailout creditors, the Greek government outlined new austerity measures it intends to pass in the form of $17.5 billion worth of cutbacks for 2013-2014.
New measures include two-year increase in the retirement age, salary and pension cuts, and another round of tax increases.
Also, the country’s Finance Minister Yannis Stournaras submitted a new draft budget for 2013 to the parliament, which predicts that the debt loan will increase and Greece will head even deeper into recession with national debt at $450 billion, higher than this year’s.
However, the deputy finance minister was forced to cancel the presentation of the draft budget scheduled for Wednesday due to a 24-hour journalists’ strike to protest austerity measures.
The Greek public is weary of austerity measures and has been battling them with fierce protests. As a response to the new wave of cuts, unions already announced a 48-hour strike beginning on  November 6, the time when the measures will be voted on.
Prime Minister Antonis Samaras believes Greece’s financial well-being depends on whether the parliament will pass the new cuts in exchange for new $40-billion bailout loan, without which the country is predicted to run out of money on November 16, reported Times Argus.
Samaras even issued a statement that the country will face financial chaos if the measures are not passed, putting further pressure on the government to pass new budget cuts.
The Tap Blog is a collective of like-minded researchers and writers who’ve joined forces to distribute information and voice opinions avoided by the world’s media.