SCANDAL. British PM Gordon Brown accused of being a pedophile

According to thetestimony of a British journalist, Mike James, who now lives in Germany, the present British prime minister, Gordon Brown, is an arrant old pedophile.
The journalist says that, as a pedophile, Brown is known to the police for a long time, but the previous prime minister, Tony Blair, ordered to cover up the scandal due to the British aggression against Iraq on the basis of false information about Saddam possessing weapons of mass destruction.
According to the testimony of the British journalist, Brown is member of a ring of senior British pedophiles, consisting of general prosecutor Goldsmitdt, a former chieftain of the NATO lord Robertson and lord Mandelson. All of them are major members of masonic lodges.
The British journalist said that a group of senior pedophiles organized a massacre of children in Dunblane Primary School in Scotland on 13 (!) March 1996, killing 16 small children and a teacher. The children were killed because they knew too much about the crimes committed by British pedophile politicians .
The murder was committed by a freemason, Thomas Hamilton. But the gun with explosive bullets, as the investigation established, had been given to him by lord Cullen (Cullen on the photo with Hamilton), a member of the Labor “Scottish mafia”, which includes Gordon Brown, lord Robertson, Tony Blair and John Reid.
Lord Mandelson is constantly accused in Europe in the kidnapping young girls and boys for European Union’s elite pedophile commissioners in Brussels.
The British journalist writes:
“I can now bring to a close all speculation as to the name of Tony Blair’s most “highly placed and senior politician” (the British papers wrote about this in connection with the pedophile scandal in Scotland – KC) who fell not only under the scrutiny of Scotland Yard for crimes against children, but was also identified by the FBI as an active member of the pedophile ring run by Thomas Hamilton.
That name was first revealed to me by Norman Lamont at a private party in Clapham in 1986, during which time I worked as a scriptwriter for the British television media. Lamont later became Chancellor of the Exchequer under John Major’s Conservative administration.
Following investigations in 2003 on both my and Bob Kearley’s part, that name cropped up time and time again, and I passed the details to Internet journalist Paul Joseph Watson.
Gordon Brown, the current British prime minister, is a practicing pedophile whose activities are known not only to the British, American and Israeli intelligence services, but also by Rupert Murdoch (the press baron of England – KC) and his senior editor at the Sunday Times”, the British journalist says.
Department of Monitoring, 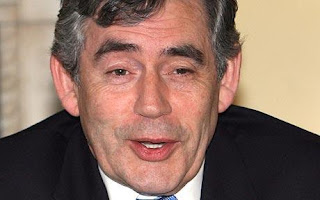 5 Responses to “Gordon Brown yet another paedophile”