‘Malaka Mohammed, an English literature student at the Islamic University of Gaza (IUG), is the president of the university’s English Language Club for female students. Under her leadership, the club of 15 members has embarked this fall on the Gaza Strip’s first campus-based boycott, divestment and sanctions (BDS) campaign targeting Israel. “After knowing that there was something called BDS, I made up my mind to do something,” Mohammed said. “So when we had our first meeting, I proposed that we boycott Israeli goods at IUG.”
Student BDS activism in the Gaza Strip began with the January 2009 launch of the Palestinian Students’ Campaign for the Academic Boycott of Israel (PSCABI), part of the Palestinian Campaign for the Academic and Cultural Boycott of Israel (PACBI). For nearly four years, the student campaign has organized at campuses across the coastal territory, mostly in support of the academic and cultural boycott of Israel.’ 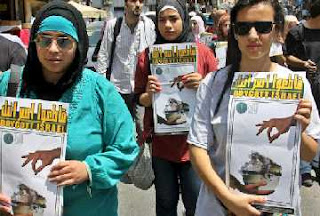 TAP – Palestine was destroyed by the Rothschilds to create a way to start a world war.  It was all planned decades ago.  Thanks to many brave people that war has still to break out.  And here still the people the Rothschilds and the Zionists decided to destroy refuse to buckle.  They know the likely consequences of resistance.  We should all learn from their bravery.  The Zionists want us all enslaved. Ot’s time people woke up and started resistance to One World Government everywhere.