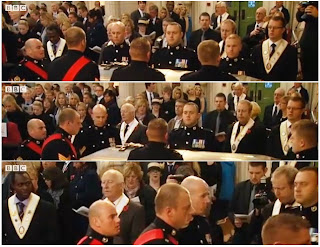 Prince Charles enlisted Jimmy Savile as a royal party organiser and asked him to invite guests to Kensington Palace on his behalf, it has emerged.
Savile invited a group of television producers involved in an ITV telethon in 1988 to a cocktail party at the palace. He was not involved with the telethon, of which Prince Charles was patron, and did not attend the party.
Paul Stewart Laing, a former director of programmes at Television South West, who took one of Savile’s calls, said several of his colleagues were contacted and many thought it was “weird” that the star was involved in organising royal engagements.
“He was phoning to invite the producers, one from each station, to go to a cocktail party in Kensington Palace,” Laing said. “He said he was phoning from the prince’s office on behalf of Prince Charles. He said he had been asked to organise a get-together as Prince Charles was so pleased with the telethon he wanted to say thank you.”
Savile’s role, apparently at the heart of Charles’s household, was confirmed by a spokesman for the prince. It will increase scrutiny of theheir’s dealings with the now disgraced TV star. Savile heavily publicised his closeness to the royals, giving the impression, some observers believe, of approval from the highest stratum of British society that may have helped him to hide his criminal activity “in plain sight”.
It also emerged that a detective involved in the Yorkshire Ripper murder case interviewed Savile after the Leeds-based TV presenter was identified as a possible suspect in an anonymous tipoff. John Stainthorpe, formerly of West Yorkshire police, said the person who reported Savile was “aiming in the right direction”, adding: “Child perverts soon become child killers.”
A force spokesman said: “As with thousands of other men in Leeds at the time, he may at some time have been approached by detectives on the investigation.”
Clarence House said there was nothing unusual about Savile organising a royal party. “When the prince is patron of an event we often ask people prominent within the relevant industry (in this case, television) to help us organise a reception to thank those who helped make the event such a success,” the prince’s spokesman said.
Clarence House has declined to comment on the scandal surrounding Charles’s former friend and has said the relationship was primarily a result of their “shared interest in supporting disability charities”.
But the connections appear to go beyond that. At the weekend it was reported that Charles asked Savile for advice over the appointment of a senior aide for him and Princess Diana. They were said to have met Sir Christopher Airy before he was offered the post of the royal couple’s private secretary and treasurer in 1990.
Last week a former senior royal aide said Savile’s behaviour when he visited Charles’s official home at St James’s Palace was a cause for “concern and suspicion”. Dicky Arbiter, spokesman for the Queen between 1988 and 2000, said Savile used to rub his lips up the arms of Charles’s young female assistants as a greeting.
In 1999 Charles accepted an invitation to a private meal at Savile’s Glencoe home, which last week was daubed with graffiti reading “Jimmy the beast”. Savile asked three local women to dress up in pinafores emblazoned with the letters HRH and Charles subsequently sent the television presenter a Christmas card with the note: “Jimmy, with affectionate greetings from Charles. Give my love to your ladies in Scotland.”
Charles reportedly sent him a box of cigars and a pair of gold cufflinks on his 80th birthday with a note that read: “Nobody will ever know what you have done for this country Jimmy. This is to go some way in thanking you for that.”

Cast of DJ’s teeth was made.

“Savile’s teeth were examined in 1980, a year before Peter Sutcliffe was convicted of murdering 13 women and attempting to kill seven others….

“Police knew that Savile used prostitutes, according to a friend of the dentist involved….