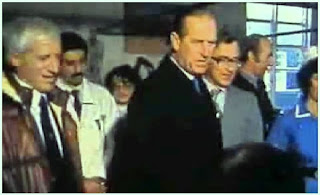 I came across this picture on a comment thread on David Icke, a rare shot of the Duke of Edinburgh visiting a hospital with Jimmy Savile.  Just think of the change in perception we have gone through this year.  Before Gordon Logan blogged that Savile was procuring kids for the powerful in Novermber 2011, and the revelations of powerful paedophile rings going all the way to the top,  the sight of these two characters visiting NHS hospitals would have been almost reassuring.  They care, might have been the thought that came to mind.

Now we see something completely different – two filthy old shoppers inspecting the meat rack.  Will anyone still want a Royal Family the more these home truths spill out?  No one will say much, in all probability, being British and all, with our reserve second nature.  But no more can we feel pride at who we are.  I often say we are not really British, anyway.  We send out people to kill in all the countries of the world, to promote a world government that is enslaving not just the obvious victims, like the Iraqis, the Libyans and the Syrians, but everyone on the planet, ourselves included.  That’s how dumb we are.

Our town is invariably filled with people in uniform collecting money for wounded soldiers, selling poppies, recruiting and promoting warfare in any way they can.  Many young men seem to walk around uniformed now, whereas a few years ago, all uniform had disappeared as it made them into terrorist targets.

The very skies above the heads of these ‘do-gooder’ squaddies are filled with chemtrails.  We are being frozen, poisoned and infected, while the Police State gradually merges in around us.  Water supplies are toxic.  Food is degrading.  All the while the elites are busy looking over our children, picking out their victims of choice for rape, torture and enforced gratification.

Anyone who sings the national anthem is an idiot.  Anyone who identifies with the royalty nonsense splurged all over their TV set is not only nuts, but also a traitor to our species.  Whatever future we are to salvage from this Rothschild Zionist world we are living in, getting rid of Royalty comes top of the list.  Without a Royal Family to fawn over, the lesser perverts, the McAlpines and the hundreds/thousands of other dysfunctional creeps sordidly eyeing over our children, would have no protective lair, or seeming respectability for their perverted ways.  The picture above actually makes me feel sick.  When will the media get the message and stop promoting these perverts at us day and night?  We’ve had enough.

great article, but Gordon Logan was not the first whistleblower BTW
In W W II Gen Montgomery was said by many in the 8th army to be a taker of young boys, the British soldiers hated him and his 2 bodyguards.
Churchill senrt him to the conflict
because montgomery knew eneough about Churchill, so its not a new thing.

TAP – But then people thought the war was real.  Now we know it was all a false event, orchestrated and controlled  by a higher cabal, Victor Rothschild et al.

6 Responses to “Changing perception of who we are”