Anyone reporting weird thick cobweb like “threads/clumps” floating in the air, especially near the ground, in the Brighton and the South Downs area this afternoon? 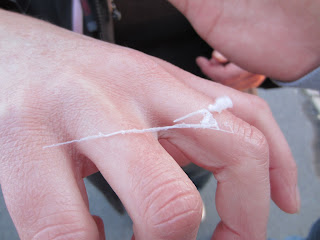 I know there are a lot of spiders around at this time of the year, but these were almost like them being stuck together, which seems a little odd to me, creating these thick strands, which when you breathed on them, either turned into a brittle like fibre as you pulled it apart, or “evaporated”, which again, was a little odd to me.

Want me to fling you the photos?
JK

My first thought is ‘was there any chemtrailing in the sky this morning’. Something had me thinking today.

Thisa morning I was going to a friends and it was my turn to provide the meat and wine. So at 10am I loaded up my half pig and barrel and set off to Sheffield from Huddersfield.

It was a beutiful bright morning as I was driving up over the moors. Just as I came over the top at Penistone in front above me was a sky full of chemtrailing all over Sheffield. it was criss crossed in diamond patterns and I believe there was 8 or 10 planes very high up doing it.

The sky was covered from the West over the pennines to as far East as I could see. I’d like to hear from our friend in Doncaster if he was being chemtrailed over there. If so then chemtrailing was completely across South Yorkshire.

Within a couple of hours the sky was full of thin cloud and even though the sun did shine through it was dulled.

The reason I write this is because on my journey home at around 8.30pm of course it was dark. But in my headlights I kept getting sparkles like ice or tiny drops of rain falling. I stopped and got out and could feel a very light rain on the face but it was not raining. As I looked up I coulnt see any stars or the moon so there must have been cloud cover.

Could it have been something similar to what this person experianced down south. It was very cold and there was no wind. Could chemicals actually freeze in the cold air into strands as they fall.

Hi Tap, John is correct in what he says, after the fog cleared over Doncaster, they were full at it, covering up the Sunlight.
NATO have been chemtrailing all last week, the wind was blowing the trails away, so they were full on spraying.
On Planefinder most normal air traffic is over to the west, so they use Yorkshire which is to the East and fairly clear of traffic.
Saw what I thought was a near miss as the aircraft were crossing, they are desparate to cover the Sun.

TAP –  Their hearts are clearly set on causing a really cold winter for 2012.

Hi Tap, I have been taking a bit of a rest from Blogging, & am doing some History Research, which interests me most,  but I read the Post about  ‘Brighton hit with Strange Tangled Cobwebs’ , which struck me as being related to ‘CHEMTRAILS’,  which is another stage of The ‘TRANS-HUMANISM PROJECT’, most People who only look at Mainstream Media have never heard of.

Jan Smith suggests that The Secret Government’s Nanotechnology Programme is out of control. I don’t think anyone would disagree with that statement, do you?
Patient/researcher Jan Smith has accumulated an extensive group of Morgellon’s slides.  Dr Spencer, Dr Staninger, Dr Castle, Ms Smith (and many others) have concluded that the current chemtrail/Morgellon’s attack is closely related to the Transhumanism agenda currently underway in the United States and across the world.  Racing Down The Road To Transhumanism !
More detailed information is presented on some of the specimens in the Photo Journal and at other headings at the Morgellons Exposed website. Other researchers may have additional specimens to those I have discovered. This disease has variations from person to person.  There are many different kinds of fibers involved with Morgellons disease.  Each type has it’s own specific purpose.  This is why I have come to the conclusion that a complex system of wiring is taking place in human beings.  The chemtrails, tainted food, inoculations, and clothing fibers are an attempt to transhumanize us or to simply reduce our life span.  I believe it is both.  Take a good look at all of the different manifestations that are happening in the human body and consider the frightening possibilities.”
REGARDS  ………….  WASP
The Tap Blog is a collective of like-minded researchers and writers who’ve joined forces to distribute information and voice opinions avoided by the world’s media.