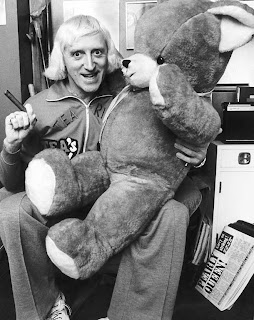 Now onto more interesting and important things.  Regarding the Savile creature.  Yesterday, for the first time we were allowed to comment about him on the Telegraph blogs!
OMG, it quickly became like an ‘alternative’ site, with links being given to all the other stuff too.  Many on that site are now wide-awake and have been for some time now.  Particularly
when it comes to the Jewish instigated Cultural Marxist agenda.  It is said that anti-semitism  is on the rise again and tbh, whilst I don’t exactly condone it, I can certainly understand it.
Back to Savile for a moment.  HIGNFY, returned for a new run on the BBC yesterday evening and it was quite funny watching Hislop and Merton trying to talk their way out of any knowledge
of Savile’s activities!  Paul Merton categorically denied the existence of a transcript of an out-take of a show some years ago, where Savile was discussed in gruesome detail.  I see that transcript
is still available on your site. Merton and Hislop are a couple of creeps who are only interested in keeping their well paid BBC jobs.
I don’t think Esther Rantzen is going to come out of this too well
either.  Great acting from her on that ITV documentary last week.  Or, maybe it was the week before even.  That letter you received was interesting and I think you answered it very well indeed.  The elite
must be getting a little worried by just how far this Savile thing could reach.  But we all know that the MSM is so tightly controlled by them, that those at the very top will be safe.  Though they may
well ‘give up’ some others who are lower down in the pecking order.
It was reported in the Telegraph that Savile used to visit the so-called ‘Yorkshire Ripper’ Peter Sutcliffe in Broadmoor.  There was a
photo too.  A commenter said that one of the ‘Ripper’s’ victims was actually discovered outside of Savile’s house!  If that’s true, it’s certainly a strange ‘coincidence’.  What a cess-pit this world has become.
Best wishes
Gillian

A friend recently discovered your blog, and commented on the strange happenings whilst trying to access it. I told her she’d get used to it!

TAP – Imagine how much traffic we’d be getting without all the countermeasures!
The Tap Blog is a collective of like-minded researchers and writers who’ve joined forces to distribute information and voice opinions avoided by the world’s media.