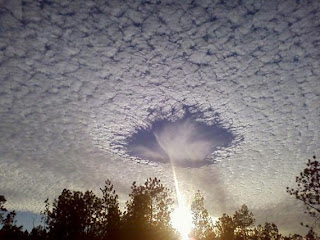 A fallstreak hole, also known as a hole punch cloud, punch hole cloud, skypunch, canal cloud or cloud hole, is a large circular gap that can appear in cirrocumulus or altocumulus clouds. Such holes are formed when the water temperature in the clouds is below freezing but the water has not frozen yet due to the lack of ice nucleation particles (see supercooled water). When a portion of the water does start to freeze it will set off a domino effect, due to the Bergeron process, causing the water vapor around it to freeze and fall to the earth as well. This leaves a large, often circular, hole in the cloud.[1]
It is believed that a disruption in the stability of the cloud layer, such as that caused by a passing jet, may induce the domino process of evaporation which creates the hole. Such clouds are not unique to any one geographic area and have been photographed from many places.
Because of their rarity and unusual appearance, as well as very little exposure in media, fallstreak holes are often mistaken for or attributed to unidentified flying objects.[2]
The Tap Blog is a collective of like-minded researchers and writers who’ve joined forces to distribute information and voice opinions avoided by the world’s media.

2 Responses to “what the hell are sky holes?”