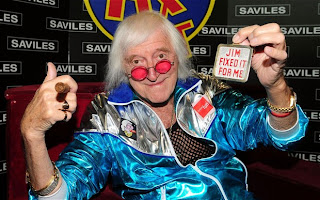 TAP – One of the Yorkshire Ripper’s victims was found outside Savile’s house.  He also admitted he had killed in an interview.  It would not be surprising given all else we know about him.

That said they’re trotting out Gary Glitter to fill the news vacuum while the judges, politicians and police all rest easy in their beds.

SAVILE: DID HE ADMIT MURDER? Have your say(1)
PAEDOPHILE Jimmy Savile “confessed” to murder on national television, sparking new fears that the monster’s reign of terror may have been worse than ever imagined.
He was speaking in 2002 after the infamous Louis Theroux documentary, in which the shamed pervert was secretly filmed boasting about his brutal criminal past as a nightclub proprieter in Leeds.

Brandishing one of his trademark cigars, he hisses: “I mean, he was having a go to try and get a bit of salacious TV so of course I suddenly drop into Godfather mode.

At the time, Theroux laughed off the apparent threat and said he took Savile’s menacing words “with a grain of salt”.


However, detectives were yesterday urged to “keep an open mind” about whether the now-notorious presenter may have been telling the truth.

Shamed Savile is now officially one of Britain’s worst ever sex offenders, with police dealing with up to 300 victims and more expected to emerge.

It has also emerged that he boasted of his links to organised crime and the IRA, had a bizarre relationship with serial killer Peter Sutcliffe and a macabre fascination with dead bodies.

Yesterday, one of Britain’s leading criminologists urged police to consider investigating Savile as a suspect in historic ‘cold case’ murders and missing persons investigations.
Forensic psychologist Dr Ian Stephen said: “Paedophiles are a totally different type of criminal altogether from people who have killed women in a prolific manner. It would be very unusual to find somebody of that type, but having said that he had the money and he had the power.

“In a sense what he was saying [in the documentary] was I’m telling you this but you don’t know, that’s the way he lived his life. He was the nice guy who did all sorts of things for charity, that’s the man you see but there’s a side to me that you don’t see.

“Its like Peter Tobin, he won’t tell anybody what he’s done, it is all a big game for him. Tobin is in a different league to Savile, but he played games as well. All the things he did were games, his TV programmes, his charities, being around people in hospitals – they were all games.

“He was saying, ‘I’m the great Jimmy Savile’ and at the same time he’s going around groping young people. It is possible that he upped the game, that he needed to get that buzz from getting away with it, and the question is does he increase it? There is always that risk with people who are sensation seekers, they sometimes get bored and raise it and the possibilities are there.”

Dr Stephen also said the Metropolitan Police and other forces should “keep an open mind” with regards to Savile and any open murder cases.

He said: “They could be looking at places he was, places where people disappeared, that is how they have done it with other people.

“I don’t know if they can get anything from that but if some of his victims start talking about attempts to kill them, or instances where the abuse turned physical as opposed to sexual, they might start looking around other possibilities.”

Yesterday, it emerged that Savile had assaulted one of his victims live on air during a crowded scene on Top of the Pops.

Dr Stephen, who has worked on a number of serial killer cases and advised the makers of TV’s Cracker, said he probably got a thrill from committing crimes – or admitting them – in front of the nation.

He said: “Savile was very much a teaser, he liked to titillate people to get attention, it gave him a feeling of power to raise questions without people actually knowing the truth.

“He liked to have the knowledge that he was Jimmy Savile and he was untouchable. He had this image that he was a good person and it must have been hard to keep up, almost too hard.”

Savile was one of several celebrities who had featured on Theroux’s documentaries who were interviewed for Living With Louis, which was broadcast on the BBC in 2002.

It was a case of ‘get rid of everything, never say a word to anyone

POLICE probing an underage sex ring at the heart of Maggie Thatcher’s government were warned: “Stop investigating if you want to keep your jobs.”

Officers in London were ­ inquiring into allegations made by a teenage rent boy that a Cabinet minister had been abusing him.
The youth claimed to be one of a number of boys regularly having sex with rich and powerful men in the 1980s – some of whom would fly to the illegal orgies from Europe.
As well as the Cabinet minister – who is still alive – he pointed the finger at judges, European bigwigs and senior civil servants.
He told his story to detectives, who are understood to have received other allegations against the minister.
But a former detective who worked on the case revealed they were ­suddenly told to halt the probe.
The furious ex-policeman said: “It wasn’t that we ran out of leads but it reached a point where a warning to stop came.
“It was a case of ‘get rid of everything, never say a word to anyone’. It was made very clear to me that to ­continue asking questions would ­jeopardise my career.”
There is no suggestion that Mrs Thatcher – who is now 87 and suffering from dementia – knew about the ­investigation or the fact it was stopped.
As Britain’s first female PM, she held power from 1979 until 1990.
The accused top Tory was never arrested and no one was ever charged over the rent-boy ring.
The vulnerable teen who spoke to ­detectives vanished just weeks after blowing the whistle.
The dropped probe was carried out by the Metropolitan Police – the same force now investigating six decades of abuse by telly star Jimmy Savile. It ­discovered high-profile men were ­paying the boys to attend sex parties at “millionaire properties” in London and the Home Counties.
A “network” of boys, including ­runaways, were used – many of whom were said to have been recruited around the then notorious rent-boy haunt of Leicester Square.
Some of the VIPs were said to have flown in via RAF Northolt on the outskirts of London.
One boy told police wealthy men from Belgium attended the parties, which were described as “high class” and featured top-notch food and booze.
The detective said the whistleblower was petrified about the repercussions.
He said: “The boys had been trapped in a cycle and were scared stiff about what might happen if they were found to have spoken.” The married Cabinet minister the boy named held a series of high-level posts in government.
A Whitehall security source said he received extra vetting from MI5 prior to taking up high office after rumours about his private life.
“The security services looked at him with special care,” the source said. “When you are nominated for a key Cabinet post it doesn’t matter what background you are from, you have to be vetted.
“Any weaknesses have to be disclosed to the Cabinet Secretary and Prime Minister
“But suspicions are not evidence. He’s a clever man – he would have ­dismissed it with a laugh.
“Mrs Thatcher may have suspected he was bisexual but that’s not a crime.”
Police sources in the minister’s home region said there are other unsubstantiated allegations that he was once found trying to abuse the son of a friend.
Last week Labour MP Tom Watson said he had been told of evidence ­linking another child sex ring to ­Parliament and Downing Street.
He said case files from 20 years ago involving convicted paedophile Peter Righton contained evidence of links to Number 10.
He said there was “clear intelligence of a widespread paedophile ring”, ­adding: “One of its members boasts of his links to a senior aide of a former Prime Minister, who says he could smuggle indecent images of children from abroad.”
Mr Watson said the leads were not followed up. And he said he had been contacted by someone who claimed the police “held a vast quantity of ­material suggesting Jimmy Savile was a ­predatory paedophile”.
Last week it emerged at least seven police investigations into Savile while he was alive did not result in charges.
Scotland Yard, now probing the claims of up to 300 victims, investigated the TV presenter in the 1980s over claims he attacked a girl in a caravan at BBC Television Centre in London.
Last week we asked Scotland Yard about the dropped investigation into the Cabinet minister in the 1980s at the time of going to press they had not ­responded.
The Tap Blog is a collective of like-minded researchers and writers who’ve joined forces to distribute information and voice opinions avoided by the world’s media.

9 Responses to “Was Savile a killer?”