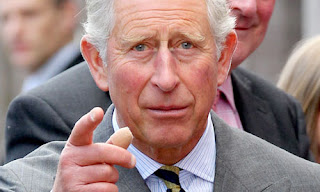 The role of Prince Charles in government, at national and world level, is kept very secret.  He runs the IBLF – the international business leaders forum at the United Nations.  This dictates the ‘ethics’ which the largest corporations in the world must abide by.  That means depopulation.  The British media and legal system hides Prince Charles’ worldwide role as the principal proponent of lacing foods and drinks and other products with death-advancing qualities.  Not for him and his kind of course.  Here’s some of the cover up…from The Guardian. 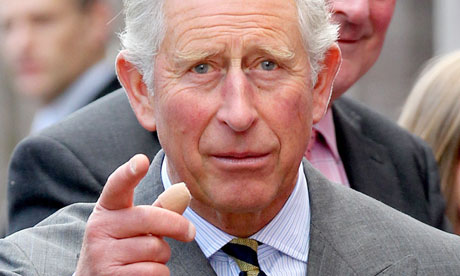 Prince Charles has been criticised for ‘meddling’ in government affairs and seeking to persuade ministers to alter policy. Photograph: Andrew Milligan/PA
Seven government departments have launched a last-ditch legal attempt to keep secret portions of confidential letters written by Prince Charles to ministers.
The legal manoeuvre was initiated shortly before they lost a long-running tribunal, which ordered that, for the first time, the prince’s letters should be disclosed under the Freedom of Information Act.
The three judges sitting in the FoI tribunal decided in September that the public had a right to know how the prince seeks to change government policy behind the scenes.
The government departments’ latest move comes after they had already spent seven years resisting the disclosure of the letters.
The long battle started in 2005 when the Guardian submitted freedom of information requests to see copies of the prince’s letters to ministers over a seven-month period.
The prince has for some years been criticised for “meddling” in government affairs and seeking to persuade ministers to alter policy.
He is believed to write to ministers arguing his personal point of view in letters which have become known as “black spider memos” because of his handwriting.
It has been reported that his interventions have included complaints about “politically correct interference” in people’s lives and the threat of an American-style personal injury culture becoming prevalent in Britain.
Critics say he should stay out of government policy as he is not democratically elected.
Last month, the FoI tribunal ruled that copies of correspondence between the prince and ministers in the seven departments over the seven-month period in 2004 and 2005 should be disclosed.
The tribunal, led by Mr Justice Walker, decided that the “essential reason” for disclosing the letters “is that it will generally be in the overall public interest for there to be transparency as to how and when Prince Charles seeks to influence government”.
The judges ordered that the letters should be handed over to the Guardian, unless ministers decide to lodge an appeal by next Thursday.
Over the course of two years, the tribunal had heard evidence on whether the letters should be released to the public.
Just before the government departments were defeated at the tribunal, they decided to raise another legal issue which they had not explicitly argued before – that parts of the letters which relate to the privacy of unspecified individuals other than the prince should be blacked out. It is unclear who these individuals are or how extensive the references to them in the letters are.
Lawyers for the Guardian had argued that “this belatedly raised issue” should be ignored as the government had failed to make this argument at any point in the past seven years.
“No explanation has been provided … as to why the issue has only been raised for the first time now, well past the 11th hour, when it cannot have escaped the departments’ legal advisers for this long,” they argued.
In a ruling published on Friday, the judges in the tribunal have decided that if the government departments do not lodge an appeal, it will spend more time deciding whether those parts of the letters concerning the privacy of these other individuals should be kept secret. That could delay the disclosure of those portions of the letters.
The Tap Blog is a collective of like-minded researchers and writers who’ve joined forces to distribute information and voice opinions avoided by the world’s media.