Tap, you might want to start a new thread for this.

Watson talks of a powerful paedophile ring with links to Parliament and Number 10.

More background on these allegations. Tom Watson said this afternoon that: “The evidence file used to convict Peter Righton, if it still exists, contains clear intelligence of a widespread paedophile ring.”

Peter Righton is a former leading childcare expert who was charged with possession of child pornography and a founder and member of the now-defunct Paedophile Information Exchange, which campaigned for the age of consent to be reduced to four. Righton was convicted of importing child pornography from Holland in 1992.

That’s not a lot is it.  MPs are bound to try to create a bit of smoke and mirrors around the topic.
Until they start opening up about the real goings-on in detail,  talk of enquiries and investigations is bound to become the daily currency of the political class, desperate to hide who they really are, and what they really do.  A slight stammer from Cameron.  That’s not going to change the culture of power that they are made of.   Watson’s an old pro, who knows how to help take pressure off by giving the appearance of serious enquiry.  Cameron will be grateful for the feed.

Tony Blair while Prime Minister put a D Notice on Operation Ore
the US backed investigation into  pedophilia, this was to protect high flyers in Britian from investigation,
one of whom was Jimmy Savile who abused boys and girls for many years. 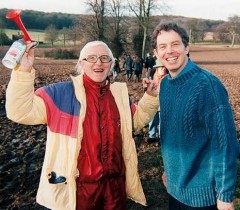 Tony himself was known as the cross dresser “Miranda ” at college and has a criminal record for worrying men in public toilets, the BBC hid up the sex crimes of people like Jimmy Savile because the BBC is the voice of government.
The disturbed sex life of comedian Frankie Howerd was also covered up by the BBC and the BBC has also been criticised for its very poor record in these matters, its coverage of the food aid convoys to Palestine has been so pro-Israel as to be a joke.
The control of the BBC has always been by the Jews who were behind the cover up.  Edwina Currie is the latest figure to admit she knew about Savile.  The next scandal about to break is how the BBC hid up the Lord Boothby/Cliff Richard/rent boys episode.
Below is the popular and well known actor Raymond Rollet, who in 1961 left a shop with some shirts under his arm.  When stopped by staff he said he was confused,  apologised and offered to pay.  He was convicted at court and fined, but his employers the BBC used this as an excuse and sacked him.
He took his life same day.  How can the BBC be so lax in one area yet so harsh in another ?

TAP –  It’s odd how Savile was close with all Prime Ministers, including Thatcher, and the Royal family, or ‘The Firm’ as he called them in his interview with Louis Theroux.  Prime Ministers came and went, while Savile was a permanent fixture.  He was more of a government than they ever were.  The suggestion that he handled Prime Ministers on behalf of intelligence services is not totally fanciful.  Who gave Savile his position?

TV keeps running Savile as a problem of the culture of celebrity, a problem from the past, with the problem exclusively to do with Savile.  They said today 2500 people have come forward this month making allegations. No mention of anyone else other than Savile, of course.  Yet they must have recurring names other than his, of famous and powerful people – some as high as you can imagine.

The victims should realise that they’re going to be collected up and shuffled off out of media awareness as soon as possible, no doubt with offers of compensation which will take years to materialise, to buy silence.  The only information that’s going to spill will be on the internet.  Otherwise it will be daily boring waffle sounding the same each day designed to send everyone to sleep, referring only to the ‘JImmy Savile’ enquiries, when paedophilia is a universal of the British system of power.

Victims should set up their own blogs, and release their information on the internet themselves publicly.  The victims must realise by now they can’t trust the BBC or the government, surely.  Get online now.  Forget the offers of money.  Go public.  Or be squashed once more.
The Tap Blog is a collective of like-minded researchers and writers who’ve joined forces to distribute information and voice opinions avoided by the world’s media.