Ben Fellows: ‘Murdoch Newspaper Does a ‘BBC’ to Protect Pedophiles and Child Abusers’

The Jimmy Savile paedophile ring at the centre of the BBC has taken an interesting twist this week as this journalist has come to realise that accusations of child abuse and paedophilia only extend to the deceased.

The Times may have canned the story because of a name tied to SKY.
It all started when I was contacted by Ruth Lewy from The Timesnewspaper on October 16, 2012. She wanted me to do an exclusive interview about my experiences as a child actor when I had run the gauntlet of paedophiles in the entertainment industry. She wanted to“give this a great showing” but she would also “want to be the only people you speak to until it appears in print this weekend.” All I asked for in return for giving The Times an exclusive was that the story would definitely run. She agreed to the terms and said that senior Times journalist Jack Malvern would interview me and a photographer would take some pictures of me for the article, which would appear on Saturday the 20th October 2012. So we arranged a time and a place to meet.

Jack Malvern a tall, balding ex-public school boy complete with the uniform of his generation was late to the meeting. When he did eventually arrive he had to go shopping for a new pad! When he did eventually arrive proper, he sat down in front of me at the Novotel in Greenwich and asked me specifically to name names of people who, I alleged, were suspected paedophiles or had abused me in some way while I was a minor.

For the next two hours I sat in the Novotel being interviewed intensely and having only one cup of tea. The deal was that I was happy to name alleged paedophiles and child abusers in the wider industry, based on my own experiences but the story had to run.

What was good about the article, I thought, was that The Times were going to be brave and publish the names of actual living breathing people, rather than dead people like Jimmy Savile or Wilfred Brambell. Famous and powerful people who could argue back, perhaps call me a liar or fantasist in an attempt to clear their name.
I talked about *******(Name redacted at the request of Cabinet Office) in political lobbyist Ian Greer’s office. How he gave me alcohol in an attempt to get me drunk. I explained to Jack Malvern that there was even video evidence of the incident as we’d filmed it during our “cash for questions” sting operation for The Cook Report, we had a camera in a briefcase which captured the sordid event.

The former health secretary Ken Clarke sought to distance himself from the decision yesterday. 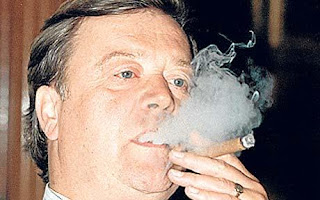 Ken Clarke, (left) top UK government minister, reportedly groped boy’s penis.
“I talked about cabinet minister Ken Clarke MP groping my penis through my trousers in political lobbyist Ian Greer’s office.
“How he gave me alcohol in an attempt to get me drunk.
“I explained to Jack Malvern that there was even video evidence of the incident as we’d filmed it during our ‘cash for questions’ sting operation for The Cook Report.
“We had a camera in a briefcase which captured the sordid event.”
– Ben Fellows, former child actor

The cabinet office denies these allegations as follows –

The comments are a complete fabrication and highly defamatory. Mr Clarke has never been involved in any incidents of this kind. He was not involved in Cash for Questions – at the time he was a Minister and therefore could not ask questions. He is firmly heterosexual. Like most parliamentarians he vaguely knew Ian Greer but had no dealings with him. The most charitable interpretation is that it is a case of mistaken identity

I talked about a senior female BBC producer who likes to have sex with teenagers. Or I should say have sex with me when I was a teenager.  I continued with a long list of names of extremely well known actors, casting directors, producers, directors, writers and executives who had all abused me or attempted to abuse me sexually while I was a child actor.

I explained to Jack Malvern of The Times, that I only ever had sexual relations with women however that didn’t stop predatory gay men from attempting to get into my pants. As a child actor you are not responsible for your actions, you’re naïve, vulnerable and quite frankly an idiot, well I was. Saying no is highly unlikely, when powerful industry people are telling you to take drugs with the implication that if you don’t, you won’t be hanging around for long.

It’s one of the oldest tricks in the book and works really on children, now add sex, money and power into the mix and you’re lucky if you don’t spend life after being a child actor in rehab and therapy – of course some do.

So, from the age of 15 I was a regular at Stringfellows, Cafe De Paris and The Atlantic Bar and Grill. I attended many celebrities parties and private functions.

One party was in a house in the New Forest and I must have been around sixteen at the time. At the party was a certain founder of a child protection charity. I was given drugs, alcohol and was propositioned by men and women all night until I ended up passed out in the garden. I eventually got a cab back to my digs in a terrible state. You’d think that for someone who is known for their charitable works protecting children she might insist that this party was for adults only and make me go home or at least keep an eye on me and stop me from drinking – recognising the fact that I looked and was very young.

For consenting adults there is nothing wrong with sex, drugs and rock ‘n’ roll. However, I was a teenager and was being introduced to a very murky world by so called “respectable” industry figures and celebrities.

Now, none of my story seemed to be a problem for Jack Malvern when he interviewed me, he was happy to publish what I said. After the interview I even checked to see if he was happy with what I said. The only issue was that later in the day he wanted to interview my mother about an incident when I was called into a casting for a major drinks company. I gave him my mother’s telephone number, he left two messages which she ignored as she didn’t want to talk to him. My mother never agreed to talk to Jack Malvern which is what I told him when I later informed him that she didn’t want to be interviewed as she’s a very private person and it was her choice. Jack Malvern didn’t seem to think it was an issue and left me with the impression that the article would run as planned on Saturday 20th October 2012.

Of course printed here are just a few stories of the many that I told him. He’d asked for names and I’d given them to him with details only one who was there would know. He even emphathised at one point and told me that my story rang true for him as he’d experienced similar problems with predatory gay men when he was a young journalist or so he told me.

Little did I know that the next BBC person I named was the one that would stop the article from coming out. The person who I am referring to shall remain nameless in this article, however they are a new star of SKY Television.  It seems that Sky have a lot invested in this person and like the BBC stopping the Jimmy Savile Newsnight programme Murdoch et al. have withdrawn an explosive article in The Times that threatened to reveal a far seedier side of their new star than they would like. Drug taking, inappropriate sexual behaviour and child abuse isn’t something the Murdoch empire want revealed.

Now, Jack Malvern of The Times may say that I’m an unreliable person or that they couldn’t corroborate the accusations I was making. But isn’t that what child abuse is all about? There are laws preventing people from making false allegations so why would I lie. In any case they said they’d run the article either with or without the names. So, why didn’t it run? My theory is that they didn’t want to give me the platform of appearing in The Times, just in case I mentioned names at a later date.

The Murdoch empire and BBC are clearly safe havens for child abusers to operate.

A society that takes the position of not believing victims, hiding the truth and protecting abusers for their own personal gain is a sad state of affairs. It is typical of a society gone mad, set up to procure children and to protect paedophiles. In other words children’s well-being comes down to simply politics. If you accuse someone of abuse and they happen to be famous or powerful then tough luck you lose. You won’t be believed, regardless of the validity of your claims by either the state or mainstream corporate media seems to be the message.

The irony is that the Murdoch empire, who has always been quick to name and shame is curiously reluctant when it comes to naming one of its own stars. It appears that the empire is only prepared to expose child abusers and paedophiles as long as it doesn’t affect its own reputation.
We’ve moved on from just phone hacking.

One of News International’s slogans on their Website is “We’re delivering more news, to more people, more often, in more ways than ever”. If the Murdoch press is willing to deny the public vital information which is in their interest to know, like exposing paedophiles and child abusers, then the question has to be – Are News International’s titles worth the paper they’re written on? Or more importantly, are the Murdochs responsible enough to run a media empire influencing millions of people all around the world.
If they’re hiding child abuse, then the answer is no.
Listen to The Ben Fellows Radio Show atwww.thebenfellowsradioshow.com.
…

RELATED: BEN FELLOWS SAYS ‘THEY ASKED ME TO NAME NAMES, BUT DIDN’T LIKE THE ONES I GAVE!’
RELATED: ‘I RAN THE GAUNTLET OF PEDOPHILES IN THE ENTERTAINMENT INDUSTRY’
RELATED: ‘HE’LL FIX IT!’ SIR JIMMY WAS A CHILD ‘FIXER’ FOR THE ELITE
The Tap Blog is a collective of like-minded researchers and writers who’ve joined forces to distribute information and voice opinions avoided by the world’s media.