Possibly the best speech of the Conference came from Owen Paterson, the new Secretary of State for the Enviroment, who denounced the Soviet-style subsidies for wind farms and was backed up by Greg Barker, the Climate Change Minister, who expressed a determination to curb the “never-ending gravy train of green subsidies”. However, as the Secretary of State for Energy and Climate Change is the Lib Dem Ed Davey.  It sounds more likely that there will be muddle and confusion than decisive action to come.

TAP – Paterson is being pushed out front of shop to bring in support for a few conservative policies.  He and John Hayes are being given some space, as the party-destroying Cameron regime tires.  Paterson is a supporter of genetically modified organisms, however, and is not exactly what the doctor ordered as regards combating the United Nations depopulation agenda.  He sees his path open to attack opponents on the lunacy of wind power, and will no doubt be opening fire on global warming before long.

As the elites are deliberately cooling the planet with boron and other reflective particles aerosoled from jets (NATO), and the gulf stream is being slowed with oil discharges in the Gulf of Mexico (BP), the freezing temperatures likely this and coming winters will make such a leap entirely sensible from the political point of view.  Paterson seems the man most likely to. 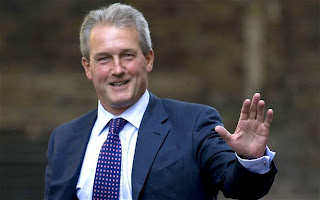 Owen Paterson is my local MP, and I am a member of his Patron’s Club.  After years as Shadow and Northern Ireland Secretary, he was made Environment Secretary in the recent reshuffle.