We all know that labeling genetically engineered foods is a common sense right that is enjoyed by over 50 other countries, including China, India, and Russia.
But for Americans, that right has been taken away from us. The chemical companies and the junk food companies have done everything possible to hide the truth from Americans for the sake of their profits.
I knew going into this battle, that it would be a significant challenge and risk to me personally. You see, when you fight against major chemical companies like Monsanto, you’re sure to get a little dirty along the way.
The processed food and chemical companies have paid over $40 million to hide the science experiment that has secretly ended up on the dinner plates of hundreds of millions of unknowing Americans. These multinational corporations are worried, and will do anything to keep you in the dark.
Keep in mind that the top six funders of “No on 37” are also the six largestpesticide companies in the world! That alone should tell you that their stance has nothing to do with your health and well-being.
This was just one of the ads that Monsanto & company have been sending voters to discredit me with lies. This is no surprise, considering how many people – inlcuding farmers, Monsanto has attacked in the past. 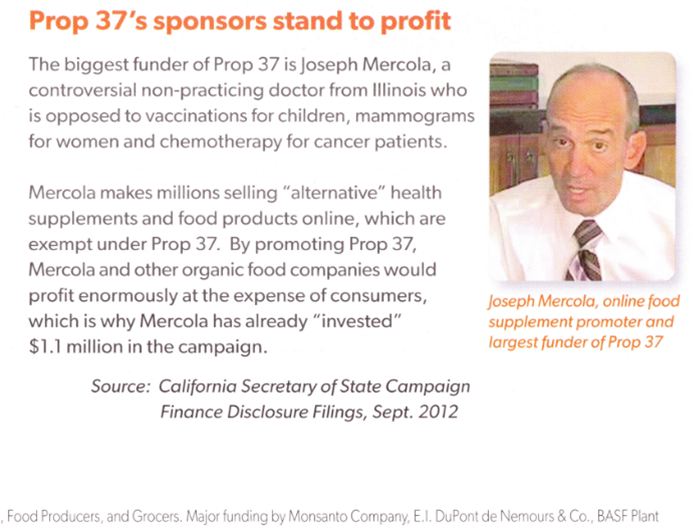 The “No on 37” campaign has been caught misinforming voters again and again over the past several months. For example, on October 18, the “California Right to Know Yes on 37” campaign requested the U.S. Department of Justice conduct a criminal investigation of the “No on 37” campaign “for possible fraudulent misuse of the official seal of the U.S. Food and Drug Administration.” According to the press release:1

“The Justice Department should investigate this fraudulent dirty trick perpetrated by the ‘No on 37’ campaign,” said Gary Ruskin, campaign manager of ‘California Right to Know Yes on 37’. “They are running a campaign of lies, deceit and trickery, and some of it may be criminal.”
The ‘No on 37’ campaign affixed the FDA’s seal to one of the campaign’smailers. Section 506 of the U.S. Criminal Code states: “Whoever… knowingly uses, affixes, or impresses any such fraudulently made, forged, counterfeited, mutilated, or altered seal or facsimile thereof to or upon any certificate, instrument, commission, document, or paper of any description… shall be fined under this title, or imprisoned not more than 5 years, or both.”
The letter also provides evidence that the ‘No on 37’ campaign falsely attributed a direct quote to the FDA in the campaign mailer. The quoted attribution, which appears below, is entirely false and fabricated. The FDA did not make this statement and does not take a position on Prop 37.”

On Halloween day BBC TV in a food programme  Gloria Hunniford compared tap water to bottled and said tap water was best and safest in every way, at no point did she mention the chemicals which go into our tap water.

In  a new twist to the Camelford water tragedy coroner Michael Rose claimed that South West water authority gambled with the lives of 20,000 people by not admitting for over two weeks that their drinking water was poisoned, he went on to say that one possible reason was that at the time in 1988 the water was being privatised, though how the government can sell what does not belong to them and keep the money is another legal point.
Giving his verdict at the inquest on Carol Cross who was one of those who died 16 years after the Camelford poisoning, the stated blame for what happened was blamed on an anonymous lorry driver who just happened to drive in and tip in 20 tons of aluminum sulphate without being challenged, the coroner accepted that this “accident” in North Cornwall was possibly the cause of the death, the Coroner went on to say that she had high levels of aluminum sulphate in her brain but would not state categorically he had enough evidence to blame South West water authority.
He did however question why for 16 days after the poisoning public health officials did nothing after people in the area were complaining their drinking water was coming out black from the tap and was sticking to the skin, and still officials were saying it was safe to drink.
The larger picture here tells us that in 1971 an informer went to the police in East London and said a plan was being discussed by political extremists to poison London water supplies, a top secret circular was sent out to every UK defense establishment and a preventative watch was kept, an Irish extremist with links to the Communist party was caught beside the reservoir with two bags of industrial poison and in exchange for internal structural information on the IRA and British communists including Melitta Norwood he was allowed to stay free as an A.I P ( Agent In Place ) The unrest from the huge Indo/Pakistani communities in Britain over the 1971 Bangladesh war meant Communists were having a field day with agitation and propaganda, the intel services were active with British industry in bringing in the Industrial relations act 1971 to curb agitation at home, and to this effect of the 550 Russian agents then active in the UK 90 were sent home and 15 not allowed back.
But the British government poison the drinking water themselves; Chlorine and industrial fluoride are both well-known thyroid disrupters which means many women who starve themselves yet still put on weight should avoid all fluoride in foodstuffs and toothpaste.
We are told repeatedly that Fluoride which was used as a rat poison strengthens human teeth, but much new information shows that this is untrue and is actually a health risk as is the Mercury amalgam they put in our teeth.
A water filter jug helps but will not take out the industrial micro-particulates of aluminum, boron etc from chemtrail rain down washed into reservoirs, government officials claim the drastic drop in the birthrate is because of the contraceptive pill going through sewerage and back through into the drinking water supplies to our homes, and this they say is responsible for fish changing sex and the feminisation of men.
There is another agenda said to be at work here, the student underground newspaper ” RSouls” claimed in the February edition that estrogen was being added to some drinking water supplies in an attempt to bring down the birthrate, and claims the rise in nancy boys and homosexual behaviour was not by accident but by design in breaking down the family structure, as predicted by Mary Whitehouse some years back in Starbreak magazine.
So what can you do? Best bet is a pure water system that filters properly your drinking water and fits under the sink, but these are expensive, so get a water filter jug failing that puta transparent glass jug with your water on a sunny windowsill and allow the sun to act on this for a couple of hours this is said to help vaporize the chlorine.
T Stokes London
Further reading- New England Journal of Medicine.
Connecticut Dental Journal “The Fluoride Deception” by Chris Bryson

Plus fluoride and arthritis

One Response to “Are the big corporations deliberately poisoning us? America wants to know.”