Ben Fulford – ‘lots of good news but no major breakthrough’  Sep 7th 2012
NETANYAHU INCREASINGLY ISOLATED
Netanyahu’s demands that the US fight Iran for him have so far fallen on deaf ears across the USA, Gen. Patreus is just one who has firmly said no, and those military specialists surrounding Obama have said the US bases in the area would have to be sacrificed for any attack, and Chinese ICBMs could reach the heartlands of America bombing it back to the stone age as it did to Iraq.
It is believed Russia could be persuaded to stay out of any conflict but China has already nailed its colours to the mast in favour of Iran, but Netanyahu has enemies inside Israel who are isolating him internally, the former head of Shin Bet,Yuval Diskin Israels version of the FBI has launched an astonishing attack on both Prime Minister Binyamin Netanyahu and Ehud Barak, accusing them of misleading the public on the Iran issue, and that Netanyahu was not fit to hold office, and their warmongering would see Israel destroyed, but the gravest accusation is that Netanyahu was personally behind the attacks on the peace aid convoys and the murder of Vittorio Arrigoni the high profile pro Palestinian pacifist which was blamed on the Palestinians, the Italian peace campaigner who was found hanged in a hovel in gaza, as Abdul Ahmed said at the time ” why would we kill a man who came to help us,  Vittorio was a critic of Israeli policies and paid a high price.”
The death of Yasser Arafat is also being re-examined thanks to crtics of Netanyahu.
The head of Israeli military Lieutenant General Benny Gantz said the Iranian leadership had not made any decisions to build nuclear weapons and it would be suicide for Israel to attack it alone, Likud party colleague Ehud Olmert has given public speeches saying Netanyahu is on the way out and the worlds people are generally on the side of Iran, and we should heed public opinion.
sent in by
T. Stokes, London
Vittorio Arrigoni 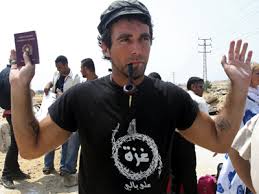 3 Responses to “WWW3 delayed yet again”