An interesting article from The Daily Bell worthy of a read. 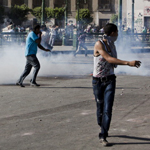 “There is a power elite funded by central banking that wants to create
world government. It uses directed history, incidents of pre-meditated
economic depression, military adventurism and regulatory
authoritarianism to support this effort”.

Conclusion: Bear in mind this movie did not sell a single ticket when it was screened. Now it is the most important film on the planet.
Editor’s Note: In addition to our write-up about this film there are now several other reports questioning the cast of characters surrounding “Desert Warrior” (now called “Innocence of Muslims”) and the creation of the film itself, which looks as if it has been “repurposed” in a very clumsy way to further “incite” the Arab world. Given the clumsiness and obviousness of the film’s manipulation, we confront a further fact of this Internet era, which is that the power elite is hardly bothering to hide its tracks anymore. Having been discovered and dissected, the powers-that-be show us they intend to continue with business as usual. It is a kind of intimidation. “Yes, you understand what we do, but it doesn’t matter. You cannot stop us.” In fact, this approach bodes terrible violence as the elites are giving up any pretense at justifying their actions. And manipulation without even a pretense of morality likely cannot stand.
FULL ARTICLE

Who REALLY Produced the Film ‘Desert Warrior’ That Is Now Convulsing the Middle East?