UPDATE – US Ambassador killing was an inside job. 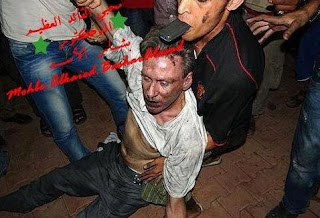 Read the Daily Intel Hub News Brief:
Attack on U.S. Consulate illustrates disastrous outcome of Obama’s “humanitarian” intervention in Libya
By Paul Joseph Watson
Infowars.com
Wednesday, September 12, 2012
Despite initial reports suggesting he died in a rocket attack on the U.S. Consulate in Benghazi, photos appear to indicate that U.S. Ambassador J. Christopher Stevens was killed by a lynch mob, illustrating the disastrous consequences of the Obama administration’s military intervention in Libya – arming some of the very same men who carried out today’s attack.

“The US ambassador to Libya, Christopher Stevens, has been killed in a rocket attack in the eastern city of Benghazi along with three other embassy staff, the White House confirmed on Wednesday,” reports France 24.
However, images released in the hours after the attack show Stevens’ body being paraded around by a mob. The body appears to show signs of torture.
Subsequent reports speculated that Stevens’ car was attacked as he and the three other personnel attempted to escape from the Consulate.
The other embassy staff were shot while Stevens’ died of “suffocation,” suggesting he was lynched and physically attacked by the mob.
The incident is being portrayed by the establishment media as a reaction to a film produced in the United States that purportedly ridicules Islam’s Prophet Mohammed.
However, the wider issue of how the 2011 bombardment of Libya paved the way for gangs of militant Islamic extremists, once backed by NATO powers with heavy weapons, to fill the power vacuum left by Colonel Gaddafi, has been largely ignored.
Indeed, it’s a horrific irony that Hillary Clinton’s infamous gloating about Gaddafi’s execution – “We came, we saw, he died” – has now come full circle, with Stevens paying for such despicable arrogance with his life.
After NATO-backed insurgents with links to Al-Qaeda helped topple Colonel Gaddafi in Libya, they proudly flew the distinctive black Al-Qaeda flag over courthouses in Benghazi and other centers of power. That same flag flew over the Consulate today after the U.S. flag was torn down and burned.
In the aftermath of last year’s “no fly zone,” which turned into an incessant bombardment almost overnight, Libya, once one of the richest countries in Africa, is now run by brutal armed gangs who have rounded up black people in huge numbers, subjecting them to torture, incarceration in concentration camps and execution.

A February 2012 report by Amnesty International found that Libya’s militias are “largely out of control” and that “Thousands of detainees are being held in various prisons across the country” and are being “tortured to death.”
The country’s NATO-installed rulers have proven themselves unwilling to prevent widespread abuse.
Libya’s oil resources have been carved up between NATO-aligned corporations while the country’s financial enslavement to global bankers is ensured with a fresh IMF loan and the end of their state-owned central banking system.
Despite the fact that Libya is in a state of hellish sectarian warfare and societal collapse, with armed thugs hostile to the west now in control of major power centers, the White House is intent on repeating the same disaster in Syria, funneling arms to rebels, the majority of whom aren’t even Syrian, who are being led by Al-Qaeda terrorists.
Indeed, some of the very same militants responsible for the Libya debacle were airlifted into Syria with the aid of NATO powers as part of the effort to topple Bashar Al-Assad.
The assault on Libya was carried out with absolutely zero constitutional authorization.
In June last year, President Obama arrogantly expressed his hostility to the rule of law when he dismissed the need to get congressional authorization to commit the United States to a military intervention in Libya, churlishly dismissing criticism and remarking, “I don’t even have to get to the Constitutional question.”
Obama tried to legitimize his failure to obtain Congressional approval for military involvement by sending a letter to Speaker of the House John Boehner in which he said the military assault was “authorized by the United Nations (U.N.) Security Council.”
Today’s attack on the U.S. Consulate serves as another reminder that the military-industrial complex’s new paradigm of “humanitarian intervention” – a scam they hope to repeat in Syria – has nothing to do with humanitarianism in that it only results in more bloodshed and more instability.
*********************
Paul Joseph Watson is the editor and writer for Prison Planet.com. He is the author of Order Out Of Chaos. Watson is also a regular fill-in host for The Alex Jones Show and Infowars Nightly News.


America Was Warned Of Embassy Attack But Did Nothing – Exclusive
Friday, September 14, 2012 3:30
Share
inShare1
0

Revealed: Inside Story Of US Envoy’s Assassination

The killings of the US ambassador to Libya and three of his staff were likely to have been the result of a serious and continuing security breach, The Independent can reveal.

American officials believe the attack was planned, but Chris Stevens had been back in the country only a short while and the details of his visit to Benghazi, where he and his staff died, were meant to be confidential.
Click to continue:
2012-09-14 03:23:14
Source: http://vladtepesblog.com/?p=52883
The Tap Blog is a collective of like-minded researchers and writers who’ve joined forces to distribute information and voice opinions avoided by the world’s media.