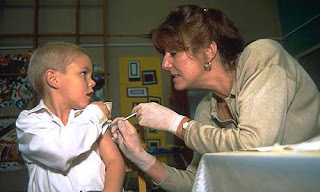 Pluserix the deadly banned MMR vaccine, rereleased with a new name, Medi-Mumps, without any license.  Vaccine criminals are winding up for a new mass cull of children.

Yet again the UK government has allowed a previously banned and dangerous vaccine onto the UK market, by repackaging it and giving it a new name in a bid to deceive parents.
The first time the UK government tried this tactic and succeeded was in 1988 when the JCVI (Joint Committee on Vaccinations and Immunizations) sanctioned the MMR vaccine Pluserix for use in the UK. Pluserix had previously been banned in Canada, causing thousands of children to suffer irreversible side effects as a result. This vaccine went on to cause the same devastation in the UK. [1]

Dr. Lucjia Tomljenovic gave a full description of these devastating side effects, including encephalitis, bilateral deafness and meningitis, in her paper The vaccination policy and the Code of Practice of the Joint Committee on Vaccination and Immunisation (JCVI): Are They at Odds? Appalled at the committee’s behavior, she exposed exactly what was being said behind the closed doors of UK’s JCVI. She wrote:
“Thus, instead of re-evaluating the vaccination policy, at least until safety concerns were fully evaluated, the JCVI choose to support the existing policy based on incomplete evidence that was available at that time.” [2]
One child who became profoundly deaf in one ear after she received the now banned vaccination, Katie Stephen, is still fighting for compensation to this day. Her mother, Wendy Stephen, is furious at her daughter’s treatment and told The Telegraph in a recent article:
“She wasn’t born this way. This was done to her by the Department of Health. They distributed pamphlets arguing that this was the right thing to do for your child, and not just that, but the right thing to do for herd immunity in the UK against these three illnesses.” [3] Parents unknowingly subjected their child to a proven dangerous vaccine.
Second Banned Vaccine Gets Revamp
Obviously not learning from the error of their ways, the UK government has once again potentially put thousands of lives at risk by re-introducing a banned, this time unlicensed vaccine onto the UK market.
In June 2012, the single mumps vaccine Medi-Mumps cultured on dog kidney cells was advertised for use at a number of private clinics as an alternative option to the MMR. It has since been discovered however, that Medi-Mumps is in fact the banned, unlicensed vaccine Pavivac. To cover this up, just like the MMR vaccine Pluserix, the vaccine was repackaged and given a new name.

Through intensive research, we have learned that on September 13, 2012, the UK’s MHRA (Medicines and Healthcare Products Regulatory Agency) wrote a press release titled Advertising Investigations. The MHRA wrote:
“13 September 2012
The MHRA was made aware of information presented on the Children’s Immunisation Centre (CIC) website about Medi-Mumps and a related press release. The MHRA was concerned that the information provided an unbalanced view of the safety and efficacy of the vaccine because it did not mention the MHRA’s concerns and previous CSM advice or that the product was unlicensed. (emphasis added)
We understood that the Medi-Mumps vaccine is manufactured from the same stock and processed in the same way as Pavivac mumps vaccine. (emphasis added) The MHRA, acting on advice from an independent advisory committee, the Committee on Safety of Medicines (CSM), has for a number of years objected to the importation of the Pavivac product because there is insufficient information available to assure its safety, quality and efficacy. See statement from the committee on safety of medicines (82Kb) for more details.
CIC amended the websites to remove the information about Medi-Mumps.
Date case raised: 3 April 2012
Date action agreed: 2 May 2012
Date of publication: 13 September 2012” [4]

DON’T SAY WE DIDN’T WARN YOU

Amazingly in May of this year on this very site, I wrote an article titled New Vaccine Made From Dog Cells May Trigger Allergy to Dogs. [5] My article highlighted the fact that a new single mumps vaccine had been slipped into private clinics in the UK through the back door.
I highlighted that the Medi-Mumps vaccine had been advertised as being available from June 2012 in two private clinics, The Children’s Immunization Centre, who have now removed the vaccine in question from their listings [6] and The Early Onset Clinic who, at the time of this writing, are still advertising it as available today. [7]
I queried whether or not that the new vaccine could possibly be the banned vaccine Pavivac repackaged and re introduced as a new product:
“Interestingly Medi-Mumps is extremely similar to the banned vaccine Pavivac. The Pavivac vaccine was also manufactured in the Czech Republic and cultured on canine kidney cells but this vaccine was rejected by the CSM (Committee on the Safety of Medicines) in 2002 because of safety concerns.” [8]
My research was spot on and once again, vactruth.com can be proven to promote child health safety.

I would like to know just how these private clinics managed to get this so wrong. Did they not realize that they were and still are, in some cases, advertising and injecting very young children with an unlicensed, previously banned product? Do they also not realize that it has been illegal to advertise unlicensed products to the public since 2010? [9]
How can we, as healthcare consumers, ever trust our governments if they continue to sanction dangerous, banned and unlicensed products for use on our children? These are only two products that we now know about. How many other banned, unlicensed drugs, vaccines and healthcare products are being recommended for use that are repackaged and renamed?
The Tap Blog is a collective of like-minded researchers and writers who’ve joined forces to distribute information and voice opinions avoided by the world’s media.