We headed into Shrewsbury for breakfast at The Lion Hotel this morning, and ended up chatting to Colin Blunstone, Rod Argent and the other members of The Zombies in the lounge.  They’re off on a world tour in a couple of weeks and were warming up their act at the Severn Theatre last night.  As they’ve been going over fifty years (first performed in 1961), warm-up is a relative term!  The Lion Hotel Owner/Manager, Howard Astbury assured me Colin still has an incredible voice.  They invited him along last night. 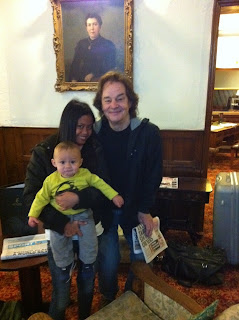 Sean’s got no idea what’s going on, now almost the same height as his mother.  Rod Argent said he’s a big lad for 8 months.

The Zombies are going to perform at CCP Complex in Pasay City, Philippines on the 19th October after Cebu on the 17th, after they’ve done Japan.  Shane asked for a photo.  Colin kindly obliged. 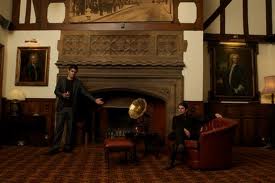 The lounge at The Lion Hotel.  You always meet interesting people there.

At my school in the 1960s, we had one single playing every break time on a 45 rpm machine – She’s Not There.   I remember every note nearly fifty years later.  I must have heard it at least 100 times a year for three years.  Here at last I meet the artists, who eased some of the stresses of public school life for the boys in our ‘social’ at Radley College, which was pretty regimented in those days.

I asked them if they had any stories they can’t get out in the main media for Tap Blog readers.  They said their journalist friends sometimes get frustrated from that point of view and might be able to send me some stuff.  Let’s see!

Here’s a Youtube of the Zombies in the 1960s.  See details of world tour on www.thezombies.net
Colin is also performing as Colin Blunstone in the UK in November.  On the 28th at Huntingdon Hall, Worcester.  Check out www.colinblunstone.co.uk for other venues and dates.  Also here’s the plaque on The Blacksmiths Arms pub where the five original members of The Zombies first met over fifty years ago.  ‘You’ve had a good knock, Colin.’ I commented. 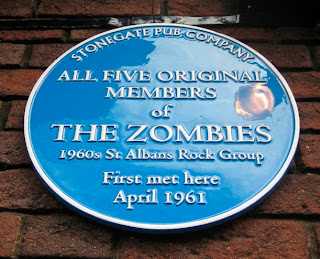