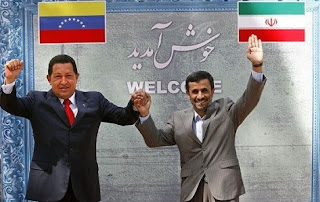 The World backs Ahmadinejad.  Yet who controls the leaders of China, Russia and Iran.  Are they also party to plan to plunge the world into war, acting out the role as opponents of One World Government, secretly being its agents – like Hitler and Churchill in WW2?  I don’t trust any of them.

Hi Tap, I don’t recollect being informed by The Main Media, that ‘THE WORLD BACKS AHMADINEJAD’ do you?
it could be due to the fact They Haven’t Reported It For Some Reason.  I WONDER WHY, as some 120 Governments, the Majority of the World—showed up in Tehran on August 26 to attend the week-long “Non-Aligned Movement” (NAM) summit, where they unanimously voted to support Iran’s nuclear energy program and condemn the American-led attempt to isolate and punish the Islamic republic.
HERE IS A LIST OF The MEMBERS  Which Anyone Would Find Quite Impressive. EXCEPT PERHAPS CLINTON H. for Starters.
If you add to this list some non-NAM Members Like RUSSIA ,CHINA, & JAPAN, who are also Sympathetic to Iran, it makes you wonder what is Going On, doesn’t it?
American Free Press
The Non-Aligned Movement: Member States
* Suspended New York Ministerial 1992 Despite the fact that the summit marked the largest international gathering in Tehran since the country’s founding in 1979, the Western mainstream media barely mentioned it. It was the strongest show of support ever for Iran’s right to peaceful nuclear energy.
The Tehran declaration document produced at the summit not only recognizes Iran’s right to peaceful nuclear energy, but also acknowledges the right to ownership of a full nuclear fuel cycle, which means uranium enrichment—a matter of deep dispute in the West. It was noted that Iran is totally compliant with the terms of the Nuclear Proliferation Treaty it signed, whereas Israel, which has threatened to attack Iran, has never signed the treaty even while possessing a large, undisclosed nuclear arsenal.
The summit was attended by two-thirds of all UN member countries. UN Secretary General Ban Ki-Moon spoke at the conference, in spite of U.S. and Israeli pressure not to attend. His presence was of great political importance to Iran. To put this all in perspective, the U.S. State Department only recognizes 194 countries.
Fifty heads of state also attended, including Afghanistan’s Hamid Karzai, Venezuela’s Hugo Chavez, Indian Prime Minister Manmohan Singh and Egyptian President Mohamad Morsi.

Ayatollah Ali Khamenei, Iran’s supreme ruler, said in his speech that the use of nuclear weapons is an “unforgivable sin” but the use of peaceful nuclear energy is “every country’s right” and that Iran will never give up that right. While condemning the policies of the U.S. and Israel toward Iran, he said that “the NAM, which includes almost two-thirds of the world community, can play a major role in shaping [the] future.”

This historic summit has sent a powerful message that the majority of the world is on Iran’s side and is not on the side of the U.S. or Israel. Could this explain why Joint Chiefs of Staff Chairman General Martin Dempsey while in Israel recently said to Prime Minister Benjamin Netanyahu that the U.S. would not back a war against Iran? The question on everyone’s mind now is will the Israelis try to go it alone?

Peter Papaherakles, a U.S. citizen since 1986, was born in Greece. He is AFP’s outreach director. If you would like to see AFP speakers at your rally, contact Pete at 202-544-5977.
I pasted this to give complete version, as when I looked at it there were interlaced popup Adverts, that were causing Trouble, so this should make it easier for you , I Guess AHMADINEJAD can say “WE ARE NOT ALONE”, but it would appears The Oppressors Are.
SO CAMERON – TAKE NOTE WE DO NOT WANT TO PLAY FOLLOW THE LEADER – OK!
REGARDS  …………………  WASP


TAP – thanks for that, WASP.  The news is full of senseless nonsense, and tells us nothing.  Your researches do much to fill the gap.  I have no idea what our real traffic is, as numbers on blogposts look heavily doctored, manipulated to keep them out of the Top Ten, which is increasingly frozen.  The numbers of reads are often kept at the same number for multiple posts,at  just below the level which would trigger them into the Top Ten.  The e-Buzzing used to let us know that our influence was far greater than the numbers suggested, but you say that too is now being doctored.  If the numbers are poor, I’ll remove it from layout.  It was good to see that we were getting into the top 100 UK political blogs on a regular basis.  That small pleasure will no doubt be removed from us shortly!
The Tap Blog is a collective of like-minded researchers and writers who’ve joined forces to distribute information and voice opinions avoided by the world’s media.

One Response to “Russia, China and Japan back Iran”