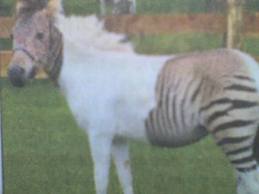 The first-ever lifetime feeding study1 evaluating the health risks of genetically engineered foods was published online on September 19, and the results are troubling, to say the least. This new study joins a list of over 30 other animal studies showing toxic or allergenic problems with genetically engineered foods.
The study, published in the peer-reviewed journal Food and Chemical Toxicology, found that rats fed a type of genetically engineered corn that is prevalent in the US food supply for two years developed massive mammary tumors, kidney and liver damage, and other serious health problems.
The research was considered so “hot” that the work was done under strict secrecy. According to a French article in Le Nouvel Observateur,2 the researchers used encrypted emails, phone conversations were banned, and they even launched a decoy study to prevent sabotage!
According to the authors:

“The health effects of a Roundup-tolerant genetically modified maize (from 11% in the diet), cultivated with or without Roundup, and Roundup alone (from 0.1ppb in water), were studied 2 years in rats. [Editors note: this level of Roundup is permitted in drinking water and GE crops in the US]
In females, all treated groups died 2-3 times more than controls, and more rapidly. This difference was visible in 3 male groups fed GMOs.
All results were hormone and sex dependent, and the pathological profiles were comparable. Females developed large mammary tumors almost always more often than and before controls, the pituitary was the second most disabled organ; the sex hormonal balance was modified by GMO and Roundup treatments.
In treated males, liver congestions and necrosis were 2.5-5.5 times higher… Marked and severe kidney nephropathies were also generally 1.3-2.3 greater. Males presented 4 times more large palpable tumors than controls, which occurred up to 600 days earlier.
Biochemistry data confirmed very significant kidney chronic deficiencies; for all treatments and both sexes, 76% of the altered parameters were kidney related. These results can be explained by the non linear endocrine-disrupting effects of Roundup, but also by the overexpression of the transgene in the GMO and its metabolic consequences.”

Folks, if this doesn’t get your attention, nothing will.
Does 10 percent or more of your diet consist of genetically engineered (GE) ingredients? At present, you can’t know for sure, since GE foods are not labeled in the US. But chances are, if you eat processed foods, your diet is chock full of genetically engineered ingredients you didn’t even know about.
The study in question includes photos and graphs. I highly recommend taking the time to actually read through this remarkable study,3 and look at the documented evidence. They really are not exaggerating when they say it caused massive tumors… They are huge! Some of the tumors weighed in at 25 percent of the rat’s total body weight. This is the most current and best evidence to date of the toxic effects of GE foods. 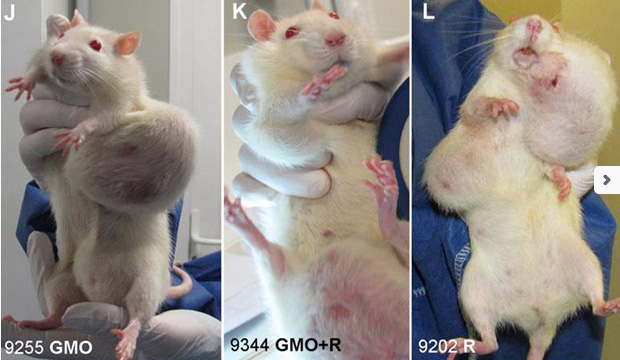 Rats only live a few years. Humans live around 80 years, so we will notice these effects in animals long before we see them in humans. The gigantic human lab experiment is only about 10 years old, so we are likely decades away from tabulating the human casualties. This is some of the strongest evidence to date that we need to exercise the precautionary principle ASAP and avoid these foods. Naturally, the study is already under heavy fire. According to Monsanto spokesman Thomas Helscher:4

“Numerous peer-reviewed scientific studies performed on biotech crops to date, including more than a hundred feeding studies, have continuously confirmed their safety, as reflected in the respective safety assessments by regulatory authorities around the world.”

However, it’s critical to understand that the longest feeding study was a mere 90 days long – a far cry from two years! In the featured study, the true onslaught of diseases really set in during the 13th month of the experiment, although tumors and severe liver and kidney damage did emerge as early as four months in males, and seven months for females.
Is it any wonder then that feeding studies lasting just a few weeks or even three months have failed to corroborate these horrific findings? Reuters quotes Mark Tester, a research professor at the Australian Centre for Plant Functional Genomics at the University of Adelaide as saying:5

“If the effects are as big as purported, and if the work really is relevant to humans, why aren’t the North Americans dropping like flies? GM has been in the food chain for over a decade over there – and longevity continues to increase inexorably.”

Although there are clearly many variables that contribute to cancer, GE foods are a new candidate as they have been in our food supply for over a decade. Interestingly, cancer was just declared as having overtaken heart disease as the number one killer among American Hispanics,6 and according to 2009 CDC statistics it’s now also the leading killer in 18 states.
I believe it is crucial that we implement the precautionary principle as rapidly as possible as this study confirms it is difficult to predict precisely what GE foods might do to the youths of today, as many are eating a fair amount of GE ingredients practicallyfrom day one. (Yes, some infant formulas actually contain GE ingredients!) What will their health be 10 or 20 years from now? Most adults simply haven’t been eating GE foods long enough to tell what the real ramifications are.
Do we really wait 50 years to see what GE foods will do to the human health and lifespan?

This newest study provides clear and convincing evidence that GE agriculture is contributing to cancer in exposed populations. The timing of this new study – two weeks before Breast Cancer Awareness Month (BCAM) – is therefore all the more fitting, as GreenMedInfo.com recently commented on this study:7

“…in female animals, 93 percent of the tumors found were in the mammary glands. They also ‘…observed a strikingly marked induction of mammary tumors by R[oundup] alone …even at the very lowest dose administered.'”

Generational gene transfer is yet another issue. A frequent claim has been that new genes introduced in GE foods are harmless, as they would theoretically be broken up in the intestines. But researchers have now discovered that genes can be transferred through the intestinal wall into your blood. GE crop genes have been found in sufficiently large amounts in human blood, muscle tissue and liver to be identified.8 And the biological impact – especially the generational impact – of this gene transfer is completely unknown, and cannot be known for at least a human generation or two. Unless we take notice of the results from animal feeding studies, that is…

This news comes on the heels of another experimental animal feeding study carried out over a 10-year period in Norway. It was published earlier this summer, and in this study, genetically engineered (GE) corn and corn-based products were found to cause obesity, and alter the function of the digestive system and major organs, including the liver, kidneys, pancreas, and genitals.9Animals fed genetically engineered Bt corn ate more, got fatter, and were less able to digest proteins due to alterations in the micro-structure of their intestines. They also suffered immune system alterations.
The impaired ability to digest proteins may be of particular concern as this can have far-reaching implications for human health. If your body cannot digest proteins, your body will be less able to produce amino acids, which are necessary building blocks for proper cell growth and function.

Related news also sheds light on the massive devastation brought on the environment by GE crops, and how soil destruction ends up affecting your health by decimating the nutrient content in the foods you eat.
In response to a scientific study that determined Western corn rootworms on two Illinois farms had developed resistance to Monsanto’s YieldGard corn, the US Environmental Protection Agency (EPA) made an admission about genetically engineered crops: Yes, there is “mounting evidence” that Monsanto’s insecticide-fighting corn is losing its effectiveness in the Midwest. Last year, resistant rootworms infested corn fields in Iowa, Illinois, Minnesota and Nebraska.
According to Bloomberg:10

“The agency’s latest statement on rootworm resistance comes a year after the problem was first documented and just as U.S. corn yields are forecast to be the lowest in 17 years amid drought in the Corn Belt. Corn is St. Louis-based Monsanto’s biggest business line, accounting for $4.81 billion of sales, or 41 percent of total revenue, in its 2011 fiscal year.
…The EPA’s focus is Monsanto’s YieldGard corn, which is engineered to produce the Cry3Bb1 protein from Bacillus thuringiensis, or Bt, a natural insecticide.
The EPA expects to get data on the performance of YieldGard from Monsanto within two months and complete its analysis by year-end the agency said in its statement, which was e-mailed by Stacy Kika, an EPA spokeswoman. The evaluation will include a review of scientific studies, it said.
…The agency may implement ‘strategies’ to reduce the threat of resistance to Cry3Bb1, it said. Kika said she couldn’t comment on what those strategies may include.”

Considering the fact that YieldGard was introduced less than a decade ago, in 2003, this could be very bad news for farmers growing genetically engineered Bt crops everywhere. It really is just a matter of time before resistance sets in, and it doesn’t take very long. Naturally, Monsanto disagrees – more data is needed to prove their insecticide-fighting corn is failing, the biotech giant claims. 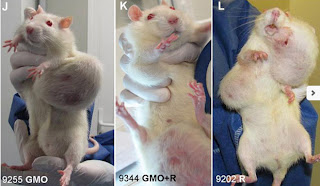