I am convinced Federer threw the Olympics Final to Murray, and attempted to throw the Wimbledon FInal to him as well.  I blogged the details at the time.  As we were moving house yesterday I failed to see the match, but reading match reports, the same suspicion as I have about Federer could equally be applied to Djokovic.  Why so many unforced errors?  Tennis champions don’t lose from unforced errors.

This match report extract for example –

Unfortunately for Djokovic, the rot continued in the fourth game. Unforced errors erupted from his racquet as he hit three balls long, while with serve, losing to trail 4-0.
But this match was all about momentum shifts, with Djokovic picking the wind and finding some game, breaking Murray’s serve in the fifth. He went on to hold and then break again, to somehow trail 5-4 and return the set back to serve.
While Murray appeared to be crumbling under the pressure, Djokovic cut out his errors – briefly – to tie things up 5-all.
And then Murray clutched at a left quad – when actually it was his game that was being stretched.
He held serve though. His quad held up too. And the 25-year-old turned things around once more to break Djokovic and win the set 7-5, and avoid a repeat of the first set tie breaker.
In reality, after two sets of Murray dominance, the separation between the finalists came down to unforced errors with Djokovic on the wrong said of the ledger by 10. 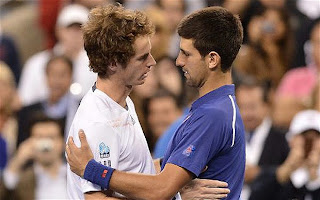 Reports of cycling wins in the Olympics coming from wheels that gave Britain advantage over all others, explaining our sudden and unlikely world dominance of a sport, plus the tennis theatricals makes me wonder what we’re being set up for.  The best psychological effect is achieved by building someone up then smashing them down.  The nice/nasty game.  We’re being thrown a lot of psychological goodies this summer, amongst the chemtrails blocking out the sun.  What’s the second shoe going to be?

One possibility is a huge freeze this winter.  It’s already chilly.  There was even an unreported  frost in Scotland at the end of August.  If they keep filling the sky with barium aluminium and strontium, blocking the sun, we could be in the arctic before very long, enduring months of ice.  The government will start issuing demands on us using climate change, which they cunningly induced, as their pretext.  To get us all psychologically ready to be called up for national service in a freezing winter, they’re softening us up with false sporting victories and endless celebrations.

The two most important countries for the elites to subsume into their planned world government are the US and the UK.  The sinister events we see in the USA tell their own story.  So far we don’t see manifestations of a Police State in the UK.  That could all change.  The summer of sporting victories feels like some kind of set-up.

Anonymous said…
I do think it will be war with Iran that will kick everything off. Israel are desperate for war with them and it will no doubt be a false flag event that is the catalyst. People thought the Olympics/Paralympics would be the false flag but obviously not. What was part of the quote that Albert Pike said about WW3 must be between and Israel and the muslim world:

”The war must be conducted in such a way that Islam (the Moslem Arabic world) and political Zionism (The state of Israel) mutually destroy each other.”

… problem is, the USA and UK are allies of Israel so we get dragged into it too.

I think when (probably not if) war starts with Iran then we’ll have the Police State: troops walking the streets, National service, food rationing, hyper-inflated oil/food prices, curfews, brown-outs, …the lot basically.

In the USA they have been prepping for something like this for years; that’s why they are buying guns and ammo like crazy and buying bulk food. The first thing we in the UK can do (if there is a colder than normal Winter) is make sure you have lots of warm clothing and blankets. There’s nothing wrong with making sure you have a healthy stock of food in reserve that will keep for a while too.

‘the world tells Israel wait theirs still time,wait until what? wait until when?’ Benjamin Netanyahu, yesterday
6:53 AM

Panic and fear will not help anything. Panic buying is what creates the shortages! Remember the petrol scare earlier this year.
The Times today reports that Cameron will use the army to police public sector strikes, as they were so successful as a security force at the Olympics. Remember also that the army was brought in when the teachers went on strike. Soldiers trained for violence running classrooms of kids. Great. WW3 is domestic I think. The UK army is being turned on its own people. It’s the battle between Humanity and the control freaks. And the only way out is to rediscover our shared humanity, and tune in to the rising consciousness that’s going on, get out of our mind prison. Then they can’t control us.
9:42 AM

It was 9/11 yesterday when Murray won, in New York. This is so obviously deliberate.
9:46 AM

12 Responses to “Did Djokovic throw the US Open?”