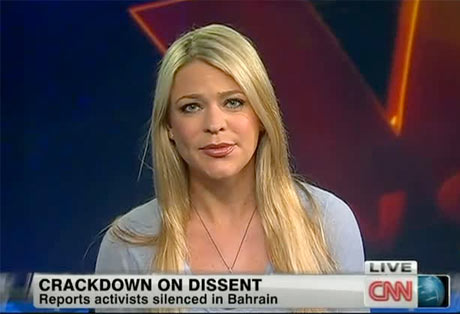 I saw first-hand that these regime claims were lies, and I couldn’t believe CNN was making me put what I knew to be government lies into my reporting.
– Amber Lyon

The Amber Lyon story is just the latest in a series of articles that expose the total Joseph Goebbels like censorship rampant in mainstream media today.  The first one I posted several weeks ago exposed how the NY Times basically just regurgitates whatever government officials tell them, while the other showcased how an NPR reporter covering D.C. had to leave and do her own thing out of frustration.  This is precisely why alternative media sites are taking off.  They provide the only outlets left for genuine journalism.
So back to Amber.  Back in March 2011, CNN sent a four person team to Bahrain to cover the Arab Spring.  Once there, the crew was the subject of extreme intimidation amongst other things, but they were able to record some fantastic footage.  As Glenn Greenwald of the UK’s Guardian writes in his blockbuster article from today:

In the segment, Lyon interviewed activists as they explicitly described their torture at the hands of government forces, while family members recounted their relatives’ abrupt disappearances. She spoke with government officials justifying the imprisonment of activists. And the segment featured harrowing video footage of regime forces shooting unarmed demonstrators, along with the mass arrests of peaceful protesters. In sum, the early 2011 CNN segment on Bahrain presented one of the starkest reports to date of the brutal repression embraced by the US-backed regime.
Despite these accolades, and despite the dangers their own journalists and their sources endured to produce it, CNN International (CNNi) never broadcast the documentary. Even in the face of numerous inquiries and complaints from their own employees inside CNN, it continued to refuse to broadcast the program or even provide any explanation for the decision. To date, this documentary has never aired on CNNi.
Having just returned from Bahrain, Lyon says she “saw first-hand that these regime claims were lies, and I couldn’t believe CNN was making me put what I knew to be government lies into my reporting.”
After Lyon’s crew returned from Bahrain, CNN had no correspondents regularly reporting on the escalating violence. In emails to her producers and executives, Lyon repeatedly asked to return to Bahrain. Her requests were denied, and she was never sent back. She thus resorted to improvising coverage by interviewing activists via Skype in an attempt, she said, “to keep Bahrain in the news”.
In March 2012, Lyon was laid off from CNN as part of an unrelated move by the network to outsource its investigative documentaries.
“At this point,” Lyon said, “I look at those payments as dirty money to stay silent. I got into journalism to expose, not help conceal, wrongdoing, and I’m not willing to keep quiet about this any longer, even if it means I’ll lose those payments.”

Amber Lyon, I salute you.
Please forward this post to everyone you know.  I for one want to live in a country with some real and free press.  Not some CIA propaganda arm that pretends to be a reliable source of news.
The Tap Blog is a collective of like-minded researchers and writers who’ve joined forces to distribute information and voice opinions avoided by the world’s media.

One Response to “CNN are liars says former CNN reporter”