The events of 11 September are engraved on our memory for ever, the aniversary just a week away with the awful tragedy of how could this have happened, ?
that this filthy sick old man in a cave in Afghanistan, that did not even have running water or a toilet, managed to-
1    Send the President away to play with primary school kids.
2  Stand down the USAF for the day
3  switch off our top secret satellite defence systems.
4   Bypass our sophisticated return/attack programmes on our submarines and helicopters
5  Turn off our nuclear carrier watch/patrol defence systems.
6  Ignore all incoming warnings from all sources, radio, telephone monitoring and incoming aircraft radar signals.
7  manage to kindly tell Jewish people to take the day off.
But this Osama Bin-laden is a very clever chap, he also needed to keep being killed, the oficial news has told us that the US has killed him 3 times over 10 years, but luckily Larry Silverstein doubled his insurance on the buildings just before the attacks, and just when they were condemned for the amount of toxic asbestos they contained too, just coincidence of course.
But a recent telephone poll has said that lmost 80% of americans dont buy the official line on 9/11, where apparently these two planes were hijacked by muslim extremists who crashed the planes into the twin towers, and then tower number 3 just fell down on its own some hours later, it was the shock of the other towers falling down some newspapers said,
while there are many reports that these muslim extremists are actually still alive, but it was some Isrealis that were arrested for singing and dancing nearby but the FBI were told from on high to let them go.
So what are we to believe ? we do know that Bennie Netanyahu said ” that 9/11 is very good news for Israel “
it just wasnt very good news for America, and America has supported and financed Israel for way too long,
and they are seen round the world as a pariah terror state, just days ago an Israeli court said the driver of an Israeli bulldozer who drove up to where Rachel Corrie was standing in her brightly visible jacket and drove over her,
some reports say twice, and the Israelis said the driver was not to blame, how sick are these people ?
and we in America support them economically while our people are jobless and homeless, because the same government which suports israel gave our jobs away.
Dov Zakheim is said off the record by C I A sources to be the 9/11 mastermind, to make America go into Iraq Afghanistan
Libya Syria, and soon Lebanon and Iran and all for Israels benefit, well many US servicemen are saying NO,
and even more in Britian are saying NO, but some like Pat Tillman are being murdered for saying ” the Israelis did it”. 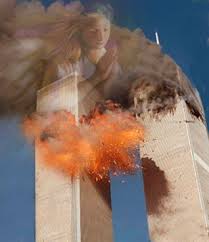 Nostradamus the 16th century prophet, or clever hoaxer which ever way you want to see him

is reputed to have said below-
In the year of the new century and nine months,
From the sky will come a great King of Terror…
The sky will burn at forty-five degrees.
Fire approaches the great new city…”
“In the city of york there will be a great collapse,
2 twin brothers torn apart by chaos
while the fortress falls the great leader will succumb
third big war will begin when the big city is burning”

The Jewish new year begins on Semptember 16, the number of the tarot card depicting the falling tower,
the Yiddish year is 5772, which numerically adds to three sevens, seven is the spiritual number and 3 together  add to 21 which reduces to 3.  For Claude of Saint-Martin, “the number 21 is the number of destruction or rather of universal termination, because, as 2 is separated from 1, it is necessary that it has a means of to unite there if it wants it. This number shows at the same time the command of the production of things and their end, as well in the spiritual one as in the corporal one.”
The cabbalists believe that a carefully planned event must be caried out according to the correct numbers, such as Churchill’s D Day 6 -6 -1944, or 6-6 -9,  or it may not be successful, and they go to great lengths to make an event happen with the correct numbers for it.
September 16 has a new moon which falls in Virgo in conjunction with Mercury, signifying a new look from Israels hard liners on its own dissidents in terms of communication, and possible changes in direction, watch for covert  false flag Israeli terror attacks in the Arabian sea.
9/11 caused dramatic changes across the world, and some important insiders are saying watch for the Rosh Hashanah or Jewish New Year celebrations, and the only way to bring Israel to its senses is to boycott all its produce.
watch for a big false flag event of 9/11 proprtions, such as an attack on the USA blamed on Iran.
Dr. N. Patel Doctors against racism.
with help from-
We are anonymous.
David Icke.
UKcolumn
T Stokes London
Abe Solomons.United Synagogues aliance.
Jeff Cohen Jews For Peace.
The wise old man.
The Tap Blog is a collective of like-minded researchers and writers who’ve joined forces to distribute information and voice opinions avoided by the world’s media.