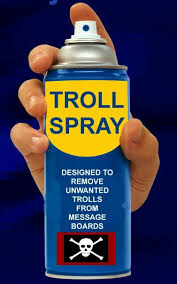 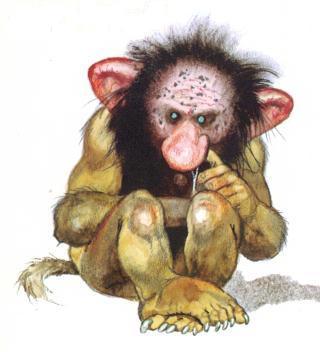 Hi Tap, I have enclosed a Troll Alert Kit, & Truth Spray Links. As usual I am a CONVEYER of INFORMATION & always give Primary Links, to Authors. I have never claimed to be the Author of any Links I send, as those ‘DICK BRAIN TROLLS CLAIM’, which shows they could well belong to a LOWER PHYLUM, a Sub Species,
They Range from Parasitic Low Life Entities, the those of Higher Development such as The One Shown Above, who are actually capable of communication, all be it ‘GOBBLEDGOOK’. It is not known in the Evolutionary Process how they actually evolved, which brings into question DARWIN THEORY, of EVOLUTION.
They are elevated to Higher Energy Levels when Key Words are Mentioned, such as GLOBAL WARMING, GENOCIDE, ROYALTY, ELITE, etc are mentioned. WHY IS THAT?
WARNING TROLLS AT LARGE, ON NO ACCOUNT FEED THEM OR GIVE THEM WATER. YOU KNOW WHAT HAPPENED, WHEN THEY GAVE WATER TO THE GREMLINS. THEY HAVE A VERY LOW INTELLIGENCE SO NEVER ANSWER QUESTIONS, & THEY HATE THE TRUTH. IT’S LIKE A SILVER BULLET TO A VAMPIRE, OR  USING A WOODEN STAKE ON THEM. chemtrailsinourskies.wordpress.com
wheelchairrights.wordpress.com
911justicehalifax.wordpress.com
canadiansituations.wordpress.com
hemptruth.wordpress.com
danieljtowseyautobiographies.wordpress.com
www.facebook.com/TheVisionaryFolkPhotographer
www.facebook.com/WeOccupyEarth
www.facebook.com/danieltowsey
www.facebook.com/wheelchairrights
www.facebook.com/911JusticeHalifax
www.facebook.com/ATruthSoldier
www.facebook.com/CanadianSituations
www.facebook.com/ChemtrailsEliminatedDeepBlueSkies
I am somewhat confused  Tap, by That Hell  ‘n’  High-water   { ( Helen Highwater) } stated, she  got it partially correct.
The  example she gave,  viz. Plato’s Allegory, was good,  but failed to connect the dots correctly, or perhaps she couldn’t even see them.
{No ‘plan’? No ‘global elites’? Really?  Back to the beginners class for you.} REALLY!
What does she think they use HAARP for ? If  she has ever heard of it.
MASKING TOAST!
.
DISINFORMATION IF EVER I SAW IT!
COMMON SENSE IS NOT SO COMMON  Voltaire.
Her myopic analysis produced an  INVERSE  RESULT, as it’s The SHEEPLE, who have been ‘CHAINED TO THE WALL’, & she is obviously one of them.
To believe what she  stated, it would be necessary to dismiss the collective PRIMARY RESEARCH  of The Top Real Historians, & Archivists, so it can only be assumed that her research was via  MICKEY MOUSE SOURCES, i.e. written history, which at best, is only 5% True.  I find that very odd, particularly in view of some of her previous comments, viz Banks, Vaccination, Programmes. Mind control etc. What Say You?

TAP – does the term come from patrol, like these people start patrolling on your blog, message board etc.  They are not here today.  Maybe they don’t get paid at weekends!
Hi Tap,
As a long-time contributor to and reader of your blog site,  I just wanted to point out to other regulars that I haven’t changed my name to Helen Highwater!
Quite why people need to change their names or indeed have so many different names, I don’t know.  Maybe there are good reasons for this, that I am unaware of.
For what it’s worth I think trolls should always be totally ignored.  i.e. Rise above it/them Wasp.  They are mental pygmies who are of no real consequence.
I was pleased to read Twig’s comment that he liked the G. Edward Griffin video ‘The Collectivist Conspiracy’  I reckon Ed Griffin is a good ol’ boy.
I came across this video on YT this week.  Recorded on 12/08/2012 it is Max Keiser on the Alex Jones Show talking about the probable crash of the US economy,
which MK believes could happen at any time between now and the end of April 2013.  Apparently some of the info. has also appeared in the Guardian and Financial Times
newspapers recently.  Alex Jones says the plans in readiness to implement Martial Law are gathering pace too.  The video is entitled ‘Max Keiser: We’re in a Financial Holocaust’
Regards,
Gillian
Ps. Sorry I couldn’t give a proper link to the MK & AJ  video.  I really must try and find out how to do that!
The Tap Blog is a collective of like-minded researchers and writers who’ve joined forces to distribute information and voice opinions avoided by the world’s media.

10 Responses to “WASP picks up the whiff of a troll”