This came in from Colin. 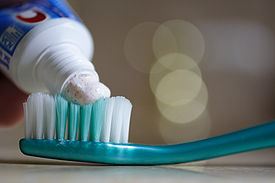 We know toothpastes are used as a depopulation device, inserting Fluoride, the Devil’s Poison into peoples’ mouths including babies and children.  They also contain detergents. What is less well known is that toothpastes don’t even work.  Your teeth clean better using soap than they do using toothpastes.  A friend of mine was advised to clean his teeth with salt when he couldn’t get rid of an abscess in his fifties.  It worked instantly.  He decided to carry on using salt and never touched toothpaste again.  He’s now in his nineties flying around the globe each year and riding camels in the desert as his main hobby.  By good luck he avoided one of the key population killers of the Illuminati.  He’s the only person I know who has made it to such an age in such good shape.  Mentally he’s sharper than most others forty years younger too.  There are no doubt other factors.  He farmed all his life and drank raw milk.  Anyway toothpaste….

Chemistry at Purdue University. In his storied career, he was an industry researcher for 18 years and a chemistry professor for 33 years. In addition, he was a speaker, writer, radio host, and author of several books including Chemistry: Its Uses In Everyday Life.
Having lived his entire adulthood observing the chemical nature of everyday life, Dr. Judd turned his attention to a subject which concerns every human being—the good health of our teeth and gums. In 1997, he penned the book Good Teeth, Birth to Death: The Prescription for Perfect Teeth.
According to the American Dental Association, there is an epidemic of tooth decay in America. Over 40% of American’s over 65 years old and 25% over 44 years old have no natural teeth remaining. Forty-four-year-olds have had an average of 30 cavities, 17-year-olds an average of 13, blacks and poor whites have twice this incidence, and Native Americans have even higher rates.
In his book Good Teeth, Birth to Death, Dr. Judd describes the chemistry that is the basis of tooth decay and gum disease. He states that he has learned the real causes of dental cavities and gum infection, and that an overwhelming amount of dental research proves the following (1):
Cavities / Decay
The Tap Blog is a collective of like-minded researchers and writers who’ve joined forces to distribute information and voice opinions avoided by the world’s media.

11 Responses to “Toothpastes CAUSE tooth decay”