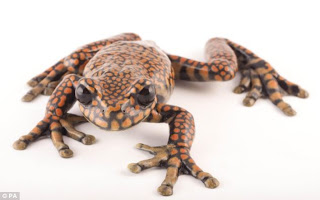 He toad you so: The Ecuadorian stream frog which has been named Hyloscirtus princecharlesi in honour of the Prince of Wales’ environmental campaigning over the years

The King is Dead, Long Live The King!
Mike Hastings, 71, died on June 30 and was buried today in Jerilderie.

He made international headlines in 2004 when a Channel Four
documentary team conducted extensive research into the monarchy and
concluded his ancestors were cheated out of the crown in the 15th
century.

Jer 33:17  For thus saith the LORD; David shall never want a man to
sit upon the throne of the house of Israel;

“Never want a man to sit upon the throne” doesn’t mean that the
ligitimate heir to the throne would always sit on it, which begs the
question then who or what sits on our throne.

He claims descent from David, Jesus, and Mohammed.
He wants to be the King of Europe.
He heads the United World Colleges.
He steers the environmental ethics and business agendas of over 100 of
the world’s largest multinational corporations.
He is credited for the success of the Rio Earth Summit and thus the
Kyoto Protocol, and he has spearheaded the push for enforceable
environmentalism worldwide.
He initiated the Global Security Programme and its lecture series, for
which Mikhail Gorbachev has become a spokesperson.
He has partnered with the United Nations and the World Bank.
He appears to be responsible for the initiation of the current Mideast
“peace process”, and has been directly involved since Yitzhak Rabin’s
funeral.
He has taken a traceable bio-chip implant.
His media exposure has exceeded that of every other man in history.