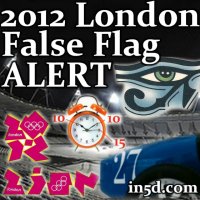 The possibilities for a false flag at the Olympics have been pushed out in all media, including the BBC, which makes the predictions a little odd. Surely an FF has to be a secret!

No. This is false false flag territory, in all probability, although saying that, there have been Olympic terror attacks in the USA – see the details about the Batman attack in particular.

More likely the Olympic terror narrative, promoted in movies and advertising, is another attempt at reducing the status of the blogger.

A different attack is envisaged, far more lethal than the bombing of a stadium containing tens of thousands of people.  They are working on the removal of Vitamin D from our bodies by the blocking of sunlight with chemtrails, undermining the immune system of hundreds of millions around the globe.  This will be followed by a mass panic about flu, with millions rushing to be vaccinated.

The business of the elites is depopulation, and nothing reduces that faster than vaccination as Bill gates has stated. Even more so when there’s a mass panic driving people to impale themselves on a laboratory-designed virus-injecting needle or saliva spray.

The only opposition will be bloggers who will be warning of the dangers. That’s why they created the false narrative of Olympic terror, to wrong-foot the only people who will be warning the populous that the flu vaccine is the real killer and not the disease itself.

See what happened in 1918. See the movie Contagion. This is their anti-blogger strategy.

In COMMENTS, TB is not happily under control in humans as WHO apparently believes. In the UK, it has increased by 8% in a year.  I am unable to add a comment for some reason.

25 Responses to “Olympic Pseudo-Terror Was An Anti-Blogger Strategy”