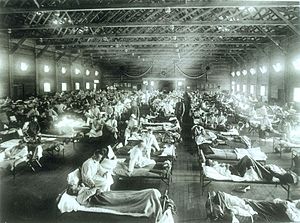 1918.  The unlucky ones who were hospitalized and ‘treated’.  Those who stayed at home had a far higher chance of survival.  The flu was spread by vaccination, and killed maybe 50 million people.  Recreating the ‘Spanish’ flu has been a project of the Illuminati going back decades.  They are preparing populations for the coming attack, using chemtrails to deprive people of Vitamin D, ensuring a very cold winter, and suppressing peoples’ immune systems by creating a toxic environment.  The H1N1 is the killer punch to take out the maximum possible number of people.  British schoolchildren are being compulsorily ‘immunised’ at their schools this winter.  Similar measures are being applied across Europe.  War used to kill with bombs, gas and bullets.  Now they use chemtrails, weather weapons and environmental devices to cull populations.

The effects of the coming flu pandemic vaccination will be to spread not prevent the disease.
The flu has been carefully prepared in the laboratory after carefully locating the genetic makeup of the H1N1 virus, the 1918 flu that killed 50 million people, and modifying it to make it easier to spread.

The outbreak will be used as an excuse to bring in martial law.  Vaccinations will be given out compulsorily.  In 1918, the majority of those who were treated in hospital died.  Those who stayed at home and were not vaccinated survived.  (See Tap Blog earlier post below)

Military planning for possible H1N1 outbreak
Story Highlights
Military wants to establish regional teams to help civilian authorities respond
Proposal awaiting final approval from Defense Secretary Robert Gates
Military could provide support such as air transport, large-scale
testingupdated 10:20 p.m. EDT, Tue July 28, 2009From Barbara Starr
CNN Pentagon CorrespondentWASHINGTON (CNN) — The U.S. military wants
to establish regional teams of military personnel to assist civilian
authorities in the event of a significant outbreak of the H1N1 virus
this fall, according to Defense Department officials.
The proposal is awaiting final approval from Defense Secretary Robert Gates.
The officials would not be identified because the proposal from U.S.
Northern Command’s Gen. Victor Renuart has not been approved by the
secretary.
The plan calls for military task forces to work in conjunction with
the Federal Emergency Management Agency. There is no final decision on
how the military effort would be manned, but one source said it would
likely include personnel from all branches of the military.

It has yet to be determined how many troops would be needed and
whether they would come from the active duty or the National Guard and
Reserve forces.
Civilian authorities would lead any relief efforts in the event of a
major outbreak, the official said. The military, as they would for a
natural disaster or other significant emergency situation, could
provide support and fulfill any tasks that civilian authorities could
not, such as air transport or testing of large numbers of viral
samples from infected patients.
As a first step, Gates is being asked to sign a so-called “execution
order” that would authorize the military to begin to conduct the
detailed planning to execute the proposed plan.
Orders to deploy actual forces would be reviewed later, depending on
how much of a health threat the flu poses this fall, the officials
said.

TAP – as someone said, they’ve been searching for gas using a lighted candle.  The scientists can be sure the flu will strike as they’re developing it in their laboratories for the purpose of causing a pandemic which can be used as a cover for military government, and mass vaccination, leading to millions of deaths.

In 1918 those who were vaccinated and went to hospital died.  Those who stayed at home, lived.  But this time they’re going to use the military to ensure no one escapes the prescribed treatment.

All the doctors and people who were living at the time of the 1918 Spanish Influenza epidemic say it was the most terrible disease the world has ever had. Strong men, hale and hearty, one day would be dead the next. The disease had the characteristics of the black death added to typhoid, diphtheria, pneumonia, smallpox, paralysis and all the diseases the people had been vaccinated with immediately following World War 1. Practically the entire population had been injected “seeded” with a dozen or more diseases — or toxic serums. When all those doctor-made diseases started breaking out all at once it was tragic.

That pandemic dragged on for two years, kept alive with the addition of more poison drugs administered by the doctors who tried to suppress the symptoms. As far as I could find out, the flu hit only the vaccinated. Those who had refused the shots escaped the flu. My family had refused all the vaccinations so we remained well all the time. We knew from the health teachings of Graham, Trail, Tilden and others, that people cannot contaminate the body with poisons without causing disease.

When the flu was at its peak, all the stores were closed as well as the schools, businesses — even the hospital, as the doctors and nurses had been vaccinated too and were down with the flu. No one was on the streets. It was like a ghost town. We seemed to be the only family which didn’t get the flu; so my parents went from house to house doing what they could to look after the sick, as it was impossible to get a doctor then. If it were possible for germs, bacteria, virus, or bacilli to cause disease, they had plenty of opportunity to attack my parents when they were spending many hours a day in the sick rooms. But they didn’t get the flu and they didn’t bring any germs home to attack us children and cause anything. None of our family had the flu — not even a sniffle— and it was in the winter with deep snow on the ground.

When I see people cringe when someone near them sneezes or coughs, I wonder how long it will take them to find out that they can’t catch it — whatever it is. The only way they can get a disease is to develop it themselves by wrong eating, drinking, smoking or doing some other things which cause internal poisoning and lowered vitality. All diseases are preventable and most of them are cureable with the right methods, not known to medical doctors, and not all drugless doctors know them either.

It has been said that the 1918 flu epidemic killed 20,000,000 people throughout the world. But, actually, the doctors killed them with their crude and deadly treatments and drugs. This is a harsh accusation but it is nevertheless true, judging by the success of the drugless doctors in comparison with that of the medical doctors.

While the medical men and medical hospitals were losing 33% of their flu cases, the non-medical hospitals such as BATTLE CREEK, KELLOGG and MACFADDEN’S HEALTH-RESTORIUM were getting almost 100% healings with their water cure, baths, enemas, etc., fasting and certain other simple healing methods, followed by carefully worked out diets of natural foods. One health doctor didn’t lose a patient in eight years. The very successful health treatment of one of those drugless doctors who didn’t lose any patients will be given in the other part of this book, titled VACCINATION CONDEMNED, to be published a little later.

If the medical doctors had been as advanced as the drugless doctors, there would not have been those 20 million deaths from the medical flu treatment.

There was seven times more disease among the vaccinated soldiers than among the unvaccinated civilians, and the diseases were those they had been vaccinated against. One soldier who had returned from overseas in 1912 told me that the army hospitals were filled with cases of infantile paralysis and he wondered why grown men should have an infant disease. Now, we know that paralysis is a common after-effect of vaccine poisoning. Those at home didn’t get the paralysis until after the world-wide vaccination campaign in 1918.