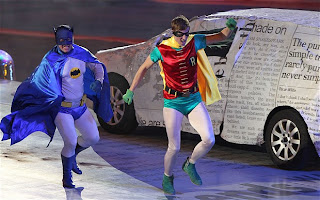 Hi Tap, I just got up to make a cup of tea, & heard on TV about  this Blaze. It is possibly an Illuminati Strike.  More than 200 firefighters and 45 engines fought to douse flames at Hunts Waste recycling centre on Chequers Lane in Dagenham, east London, just eight miles from the Olympic stadium.

What was it that was destroyed in this Fire at The Waste Site. A spokesman for Locog had given reassurances that the closing ceremony at the Olympic Stadium would not be affected by smoke from the fire. HRH E2 & Cameron weren’t there, I wonder Why?

TAP –  Cameron was there, Wasp.  Dancing with Boris.  The biggest fire in London since the war was quite a coincidence, you have to say.  Maybe she was worried about the whole thing being a last minute stitch together as described by Alan Haywood on FB.  See earlier post on how the original organizers were fired with only two months to go.

Spent the last couple of hours watching the Olympic closing ceremony, and what a load of unmitigated crap it has been…is this REALLY all we can offer the world…geriatric warblers and past their sell by date pop groups, to end what has been the greatest Olympic Games EVER…JEEZ!

Firefighters have managed to gain control of the biggest blaze in London for years which this afternoon sent plumes of smoke into the air just miles from the Olympic Park.
More than 200 firefighters and 45 engines fought to douse flames at Hunts Waste recycling centre on Chequers Lane in Dagenham, east London, just eight miles from the Olympic stadium.
London Fire Commissioner Ron Dobson said: ‘We’ve not seen a fire of this size in London for several years. It’s certainly a dramatic end to the Olympics for the London Fire Brigade. Big job: More than firefighters were called to the incident at a centre on Chequers Lane Pumps at the ready: More than 40 fire engines also attended the incident this afternoon, but fire chiefs insisted that dealing with the blaze did not impact on resources at the Olympic Park Spectacle: London Fire Brigade said a plume of smoke could be seen across the city at the height of the incident
Early this afternoon a single storey recycling building, which is around 50 metres by 100 metres, was completely alight.
Firefighters were called at 1.15pm and crews from Dagenham, Barking, East Ham and surrounding stations were sent to the scene. The cause of the fire is not known at this stage.

By late in the afternoon the blaze had been brought under control and a spokesman said fire crews at the incident would be slowly reduced through the night.
As the fire raged Assistant Commissioner Andy Hickmott said: ‘We’ve heard from people from right across London who can see the plume of smoke. I’d like to assure people we’re doing all we can to bring to bring this incident to a close as quickly as possible.
He said firefighters worked hard under challenging conditions to bring the incident to a close and that there were no reports of injuries.
London Fire Brigade said a plume of smoke could be seen across the city at the height of the incident.
A spokesman for Locog had given reassurances that the closing ceremony at the Olympic Stadium would be affected by smoke from the fire. Smokey: The fire started at about 1.15pm, but London Fire Brigade said the blaze was under control by the early evening REGARDS  ……………  WASP
The Tap Blog is a collective of like-minded researchers and writers who’ve joined forces to distribute information and voice opinions avoided by the world’s media.