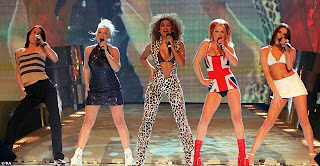 Oh no – not this lot again.  Why all the late rehearsing?  The original closing ceremony organizers were dismissed with only two months remaining.  It was chaos.  The new organizers had to redesign and execute the whole thing from scratch.  They had turned down the contract to do the opening ceremony, as not ‘their bag’, but were brought in last minute for the closing.  The Spice Girls could have been practicing six months ago, but only had a few weeks.  Scary!  We’ll soon see if they have got it sorted….


What did you think?  This man wasn’t impressed…..

Spent the last couple of hours watching the Olympic closing ceremony, and what a load of unmitigated crap it has been…is this REALLY all we can offer the world…geriatric warblers and past their sell by date pop groups, to end what has been the greatest Olympic Games EVER…JEEZ!
ORIGINAL POST FROM GILLIAN…

Hi Tap,
I just wanted to add my congratulations to those of yours for Wasp. i.e. very well done Wasp.
It’s quite true that Wasp gets some flack.  Mainly from those who either expect instant events/results, or are unable to connect the dots and see the bigger picture.
Maybe, it’s not entirely their own fault that they have become quite so dumbed-down and programmed to expect instant results or answers to anything and everything.
But, they need to at least try and think outside their allotted boxes.
However, having said that, I recently watched one of G. Edward Griffin’s videos.  This particular vid. is entitled ‘The Collectivist Conspiracy’  it is well-worth watching.
Towards the end of the vid. he says that it will not be possible to ‘awaken’ all the people (obviously) but that if only about 3% of the populace awaken, that would be enough to try and make a difference.  I found that quite encouraging.
Closing ceremony of the Games tomorrow evening.  I could hardly believe what it said in my TV guide about it.  I quote:  ‘The concert is followed by the appearance of the
athletes who say their farewells en masse, not divided by country, a way of bringing the competitors together as ‘one nation’   Now if this isn’t blatant brainwashing, then I
don’t know what is.  The message couldn’t be clearer i.e. that nation states don’t matter or count anymore.  It’s all about a New World Order and a One World Government.
Regards,
Gillian

THIS WON’T POST.  While the people are fed a diet of bread and circuses, the government secretly spreads TB as quickly as it can.  This email came in.

It’s incredible. The government is deliberately spreading tuberculosis around the country’s farms. DEFRA is not taking measures like quarantine, freezing movement of suspect animals and ensuring any outbreaks don’t spread elsewhere. This has to be deliberate.
This example came in this morning. It is not the first we have heard of. From Robert Good evening, I see DEFRA are allowing a sale of TB infected cattle to be go ahead from a farm in Devon on Tuesday 21 august 11.30 am Willsworthy,Whitstone, Holsworthy, Devon EX22 6TE TB restricted dairy cattle of 120 head. Kivells are the selling agents. How can this be allowed to happen and protect the health of the nation is beyond me. Robert
The Tap Blog is a collective of like-minded researchers and writers who’ve joined forces to distribute information and voice opinions avoided by the world’s media.