Hi TAP
Your readers are muttering about the MASONS, has the comment, “Gone over my Head”
Not a chance, The ANSWER:    NO
I include as ONE of FOUR attachments another Document I recovered in June 2010.
Page 1 of 4 of ITEMS SEIZED by Derby Police 13/1/2010
Print it: along with the other 3 attachments.
The reason Ms Andrea Davison  Photo, Criminal Case, real FAMILY Name, her Senior CONSERVATIVE MP Father, her links to MI5 / MI6, ARMS to IRAQ/IRAN Evidence, her involvement with giving evidence in secret to the Scott Inquiry is not splashed all over the major LONDON and WORLD Tabloids as JULIAN ASSANGE’s buddy.
and
The reason MS ANDREA DAVISON not being in a PRISON CELL right now is because her “DADDY”
SIR JOHN ALEC BIGGS-DAVISON
Was a very very senior CONSERVATIVE
and
a  very very senior
MASON
Ms BIGGS-DAVISON  is right now and ALWAYS has been, protected by:    THE MASONS as a JOB’s DAUGHTER 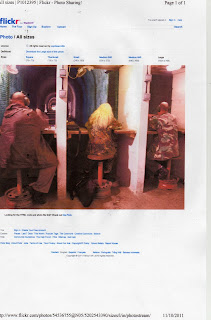 Mind you, although in Court (Civil) Case HQ10D04366 she described herself as a severely handicapped Pensioner living in an old terraced flat in Bangor North Wales.
Pity, she never produced the photographs of herself to the Judge of herself with her ex SAS live -in Partner on the TYNOL (BANGOR) Old Tunnel’s  100mtr  RIFLE Ranges dressed in full Cam gear keeping her eye in, doing some weekly target practise with her other BANGOR BNP Members.
Note the Military Spec Rifle she was using. Poor old handicapped lady: My Ar-e
Gordon Bowden
The Tap Blog is a collective of like-minded researchers and writers who’ve joined forces to distribute information and voice opinions avoided by the world’s media.