Assange ‘orders in pizza’
Meanwhile, new details of Mr Assange’s living conditions inside the embassy have emerged, with friends saying he sleeps in a converted office, orders pizza deliveries and has dance parties with pals. 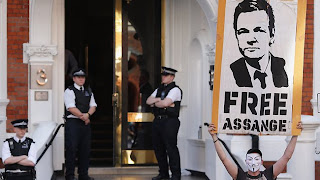 Ecuador lacks any obvious means of getting Assange past the police officers on the doorstep, onto a plane and out of Britain.
The Ecuadorian embassy consists of a ground floor apartment, some 10 rooms in all, inside an imposing red-brick apartment block in London’s posh Knightsbridge area, practically next door to the luxury department store Harrods.
The mission has no bedrooms or guest accommodation. People who have visited Assange say he is living in an office that has been outfitted with a bed, access to a phone and a connection to the Internet.
A shower has been installed, and the embassy has a small kitchenette.
“It’s not quite the Hilton,” said Gavin MacFadyen, a supporter who has met with Mr Assange at the embassy.
A treadmill provides some opportunity for exercise, and a sun lamp helps compensate for the lack of natural light.
Mr Assange’s mother, Christine, has said that visiting friends “turn the music on and encourage him to dance with them.”
But Ms Assange has expressed fears for her son’s health. She said last month he was facing severe stress after weeks of confinement and more than 18 months fighting legal battles while under strict bail conditions in Britain.
“He is under a lot of stress and it’s been long-term stress now for nearly two years and in conditions which are similar to detention,” she said.
There are few precedents for the situation Assange finds himself in. One of the most famous is the case of Roman Catholic Cardinal Jozsef Mindszenty, who sought refuge in the U.S. Embassy in Budapest in 1956 and remained there for 15 years.
Few think the current stalemate will drag on that long.
– with AP, AFP and AAP 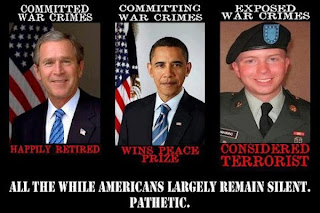 WikiLeaks founder Julian Assange made his first public appearance for two months today to demand the American government’s ‘war on whistleblowers’ must end.
He also said he had taken a ‘stand for justice’ and praised the ‘courageous South American nation’ of Ecuador as he spoke from the balcony of its embassy in central London. The 41-year-old was granted asylum by Ecuador on Thursday as he seeks to avoid extradition to Sweden, where he is wanted for questioning over sexual misconduct allegations. MORE HERE