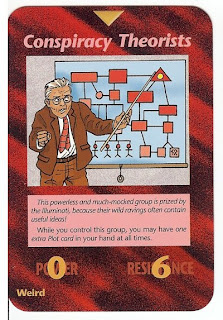 Sent into comments, the Illuminati card game has a card to explain how the elites see what they call ‘Conspiracy Theorists’.﻿  For those like me who realise that news is all a fix, and 90% not true, you have to switch off the main media, look for other explanations, and free your mind.  The Tap Blog is where I and a few others muse about what is actually going on, or might be going on.
Interestingly our efforts have come under troll attack, especially since WASP revealed that Andrea Davison has also sought refuge in the Ecuador Embassy, alongsiode Julian Assange.  Whatever she has done, it is very obvious the controllers don’t want us discussing it one little bit.
According to the above card, we are seen as useful idiots.  Through our ‘theorising’ we suggest good ideas for the elites to use in reality.  At no point are we seen as a serious alternative channel, but a bunch of powerless theorisers, who are mocked by the public at large.
I am not so sure that is in fact true.  Most people realise the news is false, and the wars are all unnecessary.  Yet have no rationale to express it all.  Once they read The Tap, they realise that they are not alone in realising the whole thing’s a giant fix.  The surprising thing is how long this has all been going on.  The internet is changing things.  The American Navy stopped war with Iran from breaking out, by being aware.  Now the elites use Al Qaeda terrorists to spread warfare into Syria and beyond, who are largely in it for the money.
The much mocked conspiracy theorist is playing a more important role as each week goes by, as more people ‘get it’ and see through the programme of the elites as they try to consolidate control of the planet through warfare, weather manipulation, and economic destruction.  Stay tuned.
Anonymous said…
So much of the Illuminati card game ( http://en.wikipedia.org/wiki/Illuminati_(game) ) is true and may well become true. Its designer Steve Jackson certainly has links to the illuminati.

Incidently, the trolls and sheeple are being played off against the so called ‘conspiracy theorists’. This was done by design by the illuminati… divide and rule… there’s even a card in the above mentioned game to denote this:

12 Responses to “Are we useful idiots?”