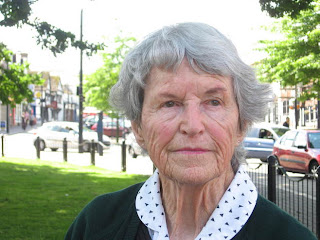 I am leaving South Africa. I have lived here for 35 years, and I shall leave with anguish.  My home and my friends are here, but I am terrified.  I know I shall be in trouble for saying so, because I am the widow of Alan Paton….

I was so sorry he did not witness the euphoria and love at the time of the election in 1994.  But I am glad he is not alive now.  He would have been so distressed to see what has happened to his beloved country.  [Without Apartheid]

I love this country with a passion, but I cannot live here any more.  I can no longer live slung about with panic buttons and gear locks.  I am tired of driving with my car windows closed and the doors locked, tired of being afraid of stopping at red lights.  I am tired of being constantly on the alert, having that sudden frisson of fear at the sight of a shadow by the gate, of a group of youths approaching—although nine times out of 10 they are innocent of harmful intent.  Such is the suspicion that dogs us all.

Among my friends and the friends of my friends, I know of nine people who have been murdered in the past four years.  An old friend, an elderly lady, was raped and murdered by someone who broke into her home for no reason at all; another was shot at a garage.

‘A character in Cry, The Beloved Country says: “I have one great fear in my heart, that one day when they are turned to loving they will find we are turned to hating.” And so it has come to pass. There is now more racial tension in this country than I have ever known.

‘President Mandela has referred to us (The thousands who are streaming out of the country) as “cowards” and says the country can do without us.  So be it.’

The Jewish project in South Africa in helping to bring down white rule has been a disaster.  A disaster for the Jews as well as for whites and many blacks, asians and coloureds as well.