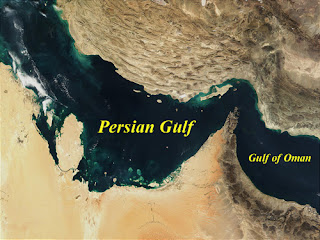 As the Olympics approach with much talk of false flag terror, the military build-up in the Gulf reaches a state of full preparedness.

At the Precipice of War: U.S. Military Build-Up Accelerates in the Persian Gulf

July 17, 2012 “Information Clearing House” —  The familiar menace of U.S. war drums have resumed at a fevered pitch, as Iran finds itself once again firmly within the Pentagon’s cross hairs.
According to multiple reports, the U.S. is currently in the midst of a massive military build-up in the Persian Gulf on a scale not seen in the region since prior to the 2003 U.S. invasion of Iraq.  The military surge reportedly includes an influx of air and naval forces,ground troops, and even sea drones.  Lest one forgets, the U.S. already has two aircraft carriers and their accompanying striker groups in the region.
A growing sense of Iran war fever can also be seen mounting in Washington.  For instance, in an effort to foil ongoing nuclear negotiations between Iran and the so-called P5+1 (the five permanent members of the U.N. Security Council plus Germany), a bipartisan group of 44 U.S. Senators recently sent a letter to President Obama urging the administration to “focus on significantly increasing the pressure on the Iranian government through sanctions and making clear that a credible military option exists.”

Such hawkish posturing occurs despite the fact that the U.S. intelligence community (as well as the Israeli intelligence community, for that matter) finds no evidence that Iran has decided to pursue a nuclear weapon–the ostensible reason behind Western sanctions and threats of attack.  Moreover, as an April Pentagon report states, Iran’s military doctrine remains one of self-defense, committed to “slow an invasion” and “force a diplomatic solution to hostilities.”  (Compare this to the U.S. military doctrine rife with notions of global “power projection” and one sees where the credible threat lies.)

The nuclear issue, though, is but a pretext used to veil U.S. imperial designs in the region.  As a senior U.S. Defense Department official recently let slip to the New York Times:  “This is not only about Iranian nuclear ambitions, but about Iran’s regional hegemonic ambitions.”  In other words, it is about removing one of the last irritants to U.S. power projection in the resource-rich Middle East.

Of course, Iran already finds itself under siege from a lethal trifecta comprised of U.S.-led cyber attacks, Israeli-led assassinations, and oppressive Western economic sanctions.  The latter of which has left ordinary Iranians to confront a toxic mix of ballooning inflation and rampant unemployment.  In short, as Conn Hallinan writes at CounterPunch, the West is “already at war with Iran.”

The question, then, is just how far this “war by other means” shall ultimately escalate?

Towards a Dangerous Escalation
Although punitive economic sanctions are frequently sold as an alternative to war, history is replete with evidence to the contrary.  In the end, sanctions are often but a prelude to military hostilities.  (One only needs to cross over to Iraq and look at the history of Western sanctions and eventual U.S. invasion.)

In fact, a recent report in the New York Times warned of much the same.  The current round of Western economic penalties imposed on Iran, the paper wrote, “represent one of the boldest uses of oil sanctions as a tool of coercion since the United States cut off oil exports to Japan in 1940. That experiment did not end well: The Japanese decided to strike before they were weakened.”

But much like the attempted torpedoing of Japan’s economy prior to the Second World War, the current attempt to bring Iran to its knees via economic sanctions may very well be designed to draw an attack from Iran–thus creating a justification for a full-fledged U.S. military campaign to impose “regime change.”

And much the same as in the 1940s, a global crisis of capitalism greases our current path to war.  After all, war enables the forcible opening of new markets, along with bounties galore to be wrought via “creative destruction”; both of which are desperately needed for the sustenance of an imperiled economic system predicated on limitless growth and expansion.  Indeed, this enduring allure of war has already reared its ugly head amidst the current crisis.

The colonial smash-and-grab that was the 2011 N.A.T.O. intervention into Libya, as Alexander Cockburn has deemed it, was our first evidence that Western elites have settled on war as a means to resolve the current intractable capitalist crisis.  But the spoils from Libya have proven to be insufficient to revive growth stymied since the onset of the 2008 financial crisis.

A heavily sanctioned Iran, on the other hand, boasts a G.D.P. over five times larger than pre-“liberated” Libya, while also sitting atop the world’s third largest oil reserves and the second largest natural gas reserves.  A defeated and placated Iran able to be enveloped more fully into the U.S.-dominated capitalist system thus holds great potential for global capitalism’s needed regeneration.  Of course, in seizing control over Iran’s energy resources, the U.S. and its allies would also come to possess a monopoly over the Middle East’s energy resources–a strategic key in any future conflict with rivals Russia and China.

And so it is that under the imperative of renewing global capitalism that the U.S. swiftly amasses its military hardware to the Persian Gulf under to cloak of combating nuclear proliferation.  The accompanying talk of military hostilities and of using “all options” against Tehran by elites in Washington thus ought not to be taken as idle threats.
Clearly, we stand at the very precipice of outright war.

Ben Schreiner is a freelance writer based in Oregon.  He may be reached at bnschreiner@gmail.com or via his website.
The Tap Blog is a collective of like-minded researchers and writers who’ve joined forces to distribute information and voice opinions avoided by the world’s media.