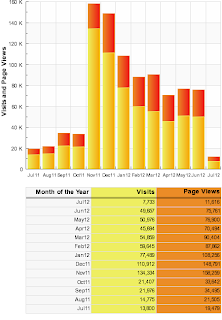 I don’t know the difference between Google ‘hits’ and Sitemeter ‘hits’.  As far as I know, Sitemeter only counts from the second page viewed, while google counts the first page as well.  Whichever system you look at shows the same pattern.  Readers are up over the year by about four times, despite many attempts to squeeze our readership, which are reported from time to time, like freezing the page, advising readers we are an unreliable site and so on.

The surge came in November, and we’ve possibly stabilized now at the current level.  There were huge numbers in February reading posts in Japan where websites copied Tap Blog stories about the earthquake saying the quake was nothing like as big as claimed, implying the tsunami was caused in other ways.

In May we logged number 46 on Politics in e-buzzing despite the countermeasures.  This month we are back where we were a year ago, which is disappointing, but who controls this information?  No other stats show any decline in our readership since May.

I stopped bothering with beforeitsnews stats as they are so unreliable too, and we’ve been pushed to one side there, it seems, not before they changed their blog to copy our style of story, I note!  At one moment we were getting 20% of their total hits!  Now maybe 2%, I haven’t even checked.

Other things seem more important, like trying to get the right milk for the baby!  The British brands all contain fluoride, which is charming.  Cow’s milk he loves, but it’s not that easy for his digestive system yet as he gets is Lactase level up – the enzyme that converts Lactose to digestible size.  I’m on the hunt for goat’s milk right now, preferably raw and not pasteurized.  Very few people keep goats any more, it appears, and local supermarkets don’t stock it.  Apart from a few tummy effects, the raw cow’s milk has given him amazing energy, and he’s sleeping far better than  before.

We all had it from three months in the 1950s.  No one worried about a few digestive troubles very much in those days.  They were few alternatives.

Hi tap. I saw some goats milk product in a reliable health food shop the other day. Had the word nanny in it. I didn’t check out the details, but I am sure there are better things out there than SMA from Boots! Human milk is the best of all for humans, but weve all been discouraged from that via various means. The Tap blog is coming up in my browser with a blank tab. No label! As if you shouldn’t exist.