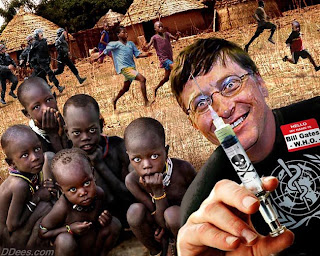 In Africa, it’s been mandatory for quite a while.  Funny how AIDS broke out in kids whose parents were not AIDS victims.  AIDS, they claimed is spread by sex.  Children don’t have sex.  The Hepatitis B vaccine was sufficient to spread the epidemic.
Bill gates wants no less than a one and a half billion reduction in the world’s human population.  He’s relying on vaccination.  Killing kids and making them sterile nets him even more money than a web browsing monopoly.  He was no chance entrepreneur.  He was part of a deal to defraud IBM’s shareholders by letting Gates in as the provider of DOS.  His father was hugely wealthy and a well-known ‘eugenicist’.
The Tap Blog is a collective of like-minded researchers and writers who’ve joined forces to distribute information and voice opinions avoided by the world’s media.