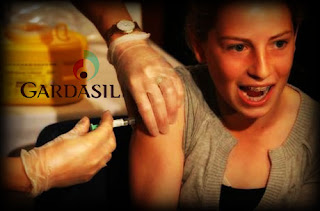 Let’s first take the HPV vaccine that was rushed through its normal protocol and made available to all young girls of high school age in which our health authorities led us to believe that this vaccine would reduce the possibility of women contracting cervical cancer in later life.
What I found amazing was the fact that one of the experts in the field, Dr. Harper, herself became concerned that this vaccine had bypassed the normal screening protocol and rushed into production with any firm evidence that it was indeed effective.
It became apparent that when the HPV vaccines were tested on animals in the laboratory most of the females animals became sterile and this then led me to believe that this could truly be a NWO ploy to carry out mass sterilisation of the worlds female population……not to mention the very serious side effects that has occurred around the world.
It would appear that when I last checked how far this bogus vaccine had been initiated in Britain I found that at least 75% of young school age females have already been inoculated…….however it does require a series of injections to complete the programme and one can only hope that common sense prevails and parents start rejecting what they are being led to believe…………..one must also keep in mind that this HPV vaccine only attacks 4 strains of the 100 strains that are believed to cause  cervical cancer and that pap smears are still required.
My comment would be that if regular checks are carried out and the pap smear programme is fully maintained one can address the problem as soon as any abnormal cell activity is found……..in my opinion the HPV vaccine is a scam to prop up the very lucrative pharmaceutical industry and at the same time taking away the right of every women to have a child or for every aged person to experience the joy of becoming a grandparent!
http://eyreinternational.wordpress.com/2012/07/26/british-government-takes-over-the-role-of-parents-by-force/