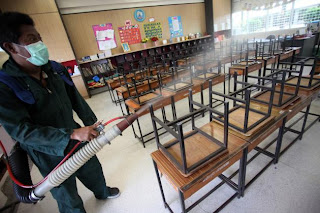 More schools will be ordered to close temporarily as the Health Ministry battles to curb the hand, foot and mouth disease (HFMD) outbreak.

Staff at Chulalongkorn University Demonstration School disinfect facilities following the outbreak of hand, foot and mouth disease, which has forced classes at many schools in Bangkok and some other provinces to be suspended. In the picture, instructions are scribbled on the blackboard telling students to take all their books and belongings home. PATTANAPONG HIRUNARD
The ministry is also racing against time to prevent a more dangerous and potentially lethal strain of the virus found in Cambodia from taking hold.

The spread of HMFD will probably continue for another month or two, the ministry warned yesterday.
Wattana Wittayalai School in Watthana district of the capital is the latest to shut after four kindergarten children were found to have contracted HFMD.
Public Health Minister Witthaya Buranasiri yesterday said HFMD infections will continue and spread in several provinces because schools are already open and the rainy season is under way.
As of yesterday, nearly 30 schools in Bangkok had either closed or suspended some classes after students were found to have caught the disease.

Health authorities have been told to monitor the situation closely and set up a provincial-level operation centre when the number of HFMD cases rises to more than 10 in one day, he said.
It is part of the Public Health Ministry’s six-point surveillance plan which also aims to prevent the potentially deadly enterovirus type 71 (EV-71) strain, which has killed dozens of children in Cambodia, from striking in Thailand.

The contagious HFMD strains circulating in Thailand are Enterovirus 71, Coxsackievirus A16 (CVA16) and Coxsackievirus A6 (CVA6), with the latter being found the most often. CVA6 is not fatal, but the viruses are airborne and change every year, he noted.

HFMD is usually found in children under age 12, particularly those under age five, he said, explaining that finding the disease among them is also normal.

In Thailand, the number of patients has reached almost 14,000, and this is considered the peak contagious period. The spread is expected to continue for up to six weeks, according to Dr Rungruang, who asked the public not to panic.

Mr Witthaya said the temporary shutdown of schools is necessary to curb the outbreak of HFMD, a viral infection that affects mostly children.
“Closing down schools is part of the measures to contain the disease and protect the children.
“Shutdowns may be required and there is no need to panic,” he said.
Charnvit Tapsupan, secretary-general of the Office of Private Education Commission (OPEC), said the school will probably announce the suspension of all kindergarten, Prathom 1 (Grade 1) and Prathom 2 classes.

He said the OPEC has recommended suspension of classes at the three levels because children in this age group are most susceptible to HFMD infection.
He said it is not known how long classes will be suspended.
Deputy Public Health Minister Surawit Khonsomboon said the cabinet agrees with the Public Health Ministry’s six-point plan to curb the outbreak.
Under the plan, the Public Health, Education and Interior ministries will also coordinate efforts to monitor the disease, especially in child care centres.

Advisories on hygiene and how to spot the infection will also be sent to schools and communities, he said.
He said there is no need to panic over the school closures which will allow them to be thoroughly disinfected of the virus.
He added that Prime Minister Yingluck Shinawatra has emphasised the need for the three ministries to coordinate efforts to contain HFMD.
Deputy Bangkok governor Malinee Sukvejvorakij said measures are being stepped up to contain the spread of the disease, especially at schools.

Wongwat Liwlak, chief of the Bangkok Metropolitan Administration (BMA)’s Communicable Diseases Control Division, said the BMA is focusing its efforts on childcare centres and kindergartens.
They have been told to inform the BMA’s health centres when a HFMD case is suspected so a rapid response team can be sent in, he said.
Elsewhere, two child care centres in Lampang’s Muang district were closed after more than 10 children were diagnosed with HFMD.

Health authorities in Ayutthaya are closely monitoring a possible outbreak of HFMD at a privately run elementary school after 16 students came down with a high fever on Monday.
The students, all from the same class in Prathom 4, were sent home as a precautionary measure.
In Ubon Ratchathani, the provincial kindergarten school has been closed for disinfection
_________________________________________________
*Hi Tap, Now, it is catching attention.
Hoping all the other reports won’t be swept under the rug.
R. Zedinko, Bangkok.