The New York Times reports that the Senate Intelligence study of prewar intelligence about Iraq will not only confirm that dire warnings about illicit weapons were largely unfounded and that ties to al Qaeda were tenuous but that “Saddam Hussein’s army posed little threat to regional stability and American interests”. In spite of what we
have been told by the administration, moreover, the resistance to our presence is not primarily from al Qaeda terrorists but from Sunni Iraqis who are angry about losing power in the wake of the fall of Saddam Hussein.


According to The Associated Press, indigenous guerrillas “can call on loyalists to boost their forces to as high as 20,000 and have enough popular support among nationalist Iraqis angered by the presence of US troops that they cannot be militarily defeated”. Although the administration actively denies parallels with Vietnam, the analogies are becoming stronger and stronger. We are bogged down in a distant land that posed no threat to our security where the population regards us as invaders, not as liberators, and where military victory appears to be impossible.


The administration persists in proclaiming that we are safer, stronger, and better for
having taken out a ruthless dictator. Yet the fellow we have selected to replace him,
Iyad Allawi, appears to be a facsimile of the fallen leader. Precisely how he became
Iraq’s interim Prime Minister remains mysterious, but also he places a premium on
security over democracy and has threatened to place Iraq under martial law, to shut down the media, and delay elections. He has been described as “brutal”, “ruthless”,
and “tough”, a suitable replacement for Saddam, perhaps, but not a fellow likely to become the George Washington of his country.


Those who continue to resist the manifest failure of this administration’s policies in the Middle East may want to consider the latest development, which has yet to make
the national news. No doubt, our greatest success in this miserable intervention has been the capture of Saddam Hussein himself. But there is now evidence that the man whom we captured is not Saddam Hussein but one of his doubles. If this is the case–and the evidence is compelling–then this may be the biggest lie to come out of Iraq from an administration that specializes in falsehoods.
On 18 June 2004, an independent Australian journalist, Joe Vialls, reported that the International Red Cross has been insisting that the captive Saddam Hussein should be turned over to Iraqi authorities. Oddly, American authorities decided that this man should be legally transferred to Iraq but kept under American military control.


This
peculiar arrangement appears to be motivated by the knowledge that the Saddam in
custody is not Saddam Hussein but one of his doubles, a matter that would not escape Iraqis were they to be given access to his person.
Indeed, under pressure from Russia, the US reluctantly allowed Saddam’s wife, Sajida
Heiralla Tuffah, access to her husband in Qatar. According to Vialls, “Sajida arrived from Syrian with her official escort, Sheikh Hamad Al-Tani, and then entered the
prison, emerging only moments later pink with rage and shouting, ‘This is not my husband but his double. Where is my husband? Take me to my husband.” She was given the unconvincing explanation that he had changed a lot in custody, which she
did not accept, insisting she would know her own husband. (The article is available on google under “Mrs Saddam says Saddam is not Saddam”.) 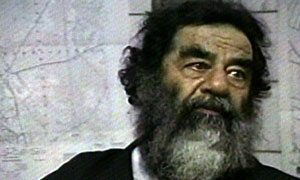 
They are not the same.
See Pictures
Curious as to whether he might be right, I performed my own search using google and NEWSWEEK (12 July 2004), which just happened to include a set of several photos of the captured Saddam, including some that display his ragged and unkempt lower teeth. What I needed in addition were photographs that the US government itself has offered as photographs of Saddam Hussein. I found what I was looking for in an on-line piece entitled, “Saddam Hussein al-Tikriti”, which may be located at the following web site: http://www.globalsecurity.org/military/world/iraq/saddam.htm.
What I liked about this source is that it not only includes a series of photographs of
Saddam Hussein but a sequence in which his original appearance has been altered to
reflect how it might have changed during the period he was attempting to evade his capture. This series was issued to Coalition troops in Iraq on 31 July 2003 in order to “better help them recognize the wanted former Iraqi leader” by CENTCOM, the Central Command. The beautiful lower teeth and slight overbite are clearly evident in these photographs from impeccable United

States sources. Here is a comparison of one of NEWSWEEK’s photos with one from CENTCOM:
Some lies are bigger than others. The deceit and deception that motivated the United States Congress into supporting armed intervention in Iraq included phony reports about weapons of mass destruction, chemical and biological capabilities, and attempts to acquire the ingredients that are required to construct nuclear bombs. One might have thought at least that lying to the American people about the capture of Saddam Hussein would be beneath our government. Apparently not.

Jim Fetzer, a professor of philosophy at UMD, maintains a web site devoted to issues of public concern at www.assassinationscience.com.