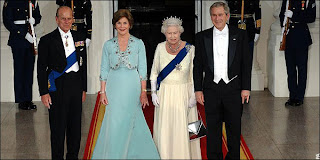 Cousin to the Queen and Duke Of Edinburgh (both great grand-children of the illegitimate Queen Victoria, daughter of Nathan Mayer Rothschild), George Bush’s left hand signals his real loyalty –  making the sign of The Devil’s Horns.  All are members of the secret society known as The Pigrims, whose mission is the destruction of nation states and the establishment of one world government.

THE QUEENS JUBILEE
The celebrations this weekend with street parties and decorated homes across the country signal the queens Diamond Jubilee, where she has presided for 60 years over the deconstruction of the UK, and before the wreckage of W W II was even cleared away we were already importing in foreign nationals to compete with our own men returning from the war for the few jobs and homes available, the government proclaimed this was necessary as our men were too lazy to work after they fought a horrific war for this same racist government.
But what exactly are we celebrating ? maybe the prospect of yet more needless wars  to inflict on Syria Lebanon and Iran what we did to Iraq and Libya, the Daily Telegraph claims the cost of the Jubilee was underestimated
at £9:3 biillion, and the Olympics has already soared to £24 billion while British people have to tighten their belts even further, with rising food and utility bills, financial pundits tell us that since Gordon Browns leadership of New Labour, taxation both visible and invisible takes a massive 7 months wages from each person in work annually, so we may not be allowed jobs in our own country but we sure can have a Jubilee and Olympics, the stadium was built with foreign labour while we had builders sitting idly on the dole, many of our young owe student grants so large they can never be paid off, and the suicide rate among this age group is tragically large.
The Christian rough sleepers coalition says it cannot cope with the huge numbers of British nationals becoming homeless,  and the morning hot soup round often finds people have died in the night, while we spend this summer £35 billion on the queen and so called sport.
The celebrations are a massive distraction  from what is really going on, some hospitals and libraries are now being manned by unpaid volunteers, because we are told there is no cash left in the national kitty,  the numbers of rough sleepers across the country has gone through the roof, and any jobs are funneled to immigrants who send the money back home out of the country, so under the Queens reign we have seen the dismantling and destruction by British politicians of the greatest empire ever seen, this attack on its own people has shown successive governments to be rotten to the core and not serving the electorate,
Have we one peep out of The queen about any of this?  No.  We have not.
Only one patriotic man the whistleblower Mike James has voiced his disaproval and is on hunger strike for Britian to leave the EU and its debt crisis andsoon his voice will fall silent.
The Queen and the government is way out of touch with its own electorate, and just as turkeys dont look forward to Christmas, we should not be cheering the huge financial waste this summer.
T Stokes London
PLUS this from HETT

The Illuminati is an improper term. Today they are called “globalists,” who are an evil group of elite and powerful people, who are rarely seen in the public’s eye, who know not the Lord Jesus Christ. They serve and worship Lucifer, the god of this world (2nd Corinthians 4:4). They are the sworn enemies of American sovereignty, Biblical Christianity, our Bill Of Rights and the U.S. Constitution. They are the perpetrators and architects of the New World Order (NWO). They are demonically influenced and controlled by Satan and are the sworn enemies of the cross of Jesus Christ. Many are homosexuals and pedophiles, blackmailable if one ever ever turns against the group, likely killed. They are devout Luciferian worshippers, and when seen in public they flash the El Diablo satanic hand-sign. Here’s a disturbing picture with U.S. President Bush flashing a satanic hand-sign… George W. Bush is just a small fish in the globalist empire of darkness. His father George H. Bush is higher up on the food chain. Aleister Crowley, the self-proclaimed “World’s Most Wicked Man” ate the feces of women during bizarre sexual acts involving Luciferian worship and Satanism. According to the shocking documentary film titled, “IN SEARCH OF THE GREAT BEAST” directed by Robert Garofalo and produced by Lyn Beardsall (2007), Barbara Bush (wife of President George H. Bush) is the daughter of the world’s most infamous Satanist, Aleister Crowley. The truth is stranger than fiction.
Through cleverly designed newsmedia propaganda, white-washing and deliberate disinformation (lying and deceiving), the globalist owned and controlled newsmedia has been able to suppress the blatant horrendous crimes of the global elite themselves [which includes the 911 attacks, the Iraqi war, and the ongoing farming of opium (heroine) crops in Afghanistan and thug stealing of Afghan’s little girls to supply the insatiable pedophile appetite of the globalists.]

Who Are The Illuminat

19 Responses to “What Exactly Are We Celebrating? The Destruction Of Our Country…”