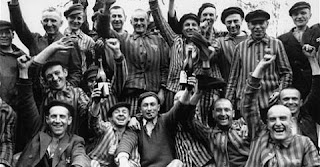 What’s to celebrate?  Someone’s making money out of this.  Not the victims.

By ADAM KLASFELD
MANHATTAN (CN) – A Brooklyn woman pleaded guilty to her role in a fraud ring that embezzled $57 million from a group that helps compensate victims of Nazi persecution.
Zlata Blavatnik, a former clerk for the Conference on Jewish Material Claims against Germany, faces up to 40 years in prison after admitting to her role in the conspiracy that approved nearly 5,000 fraudulent applications in exchange for kickbacks.
The 64-year-old pleaded guilty Tuesday.
Blavatnik and her co-conspirators were accused of submitting claims to the conference’s “hardship fund” with falsified information. That fund, sponsored by the German government, pays eligible applicants $3,500 for fleeing Nazi persecution.
“We have identified numerous applications for payment under the hardship fund in which the applicants’ names and social security numbers are valid, but where the dates of birth were doctored to make the applicant appear to be born during or before World War II,” FBI Special Agent Carrie Fisher said in her deposition.
The claims conference determined that 3,839 of its hardship fund applications appear fraudulent, causing about $12.3 million in losses for the fund.
Some of the conspirators would recruit members of the Russian Jewish community to obtain identification documents, and then pass these individuals on to a claims conference employee, investigators said.
Blavatnik was arrested in October 2011 along with Genrikh Kolontyrskiy, Viktor Levin, Ella Voskresenskiy and Henry Gordon.
The Justice Department has charged 31 people in connection to the fraud, which the FBI has been investigating since December 2009.
Blavatnik, the 12th to plead guilty, will be sentenced on Oct. 25 before U.S. District Judge Thomas Griesa.
TAP – This is more evidence that many of the acts of the ‘holocaust’ were not correct as presented.  If there so many victims needing compensating, why do they need to fabricate?
The Tap Blog is a collective of like-minded researchers and writers who’ve joined forces to distribute information and voice opinions avoided by the world’s media.