US denies secret plans for U-Tapao.

Published: 6/06/2012 at 01:52 AM Newspaper section: News US Joint Chiefs of Staff chairman General Martin E Dempsey has denied rumours of a hidden Pentagon agenda behind Nasa’s use of U-Tapao airport in Rayong as a base to conduct atmospheric studies. 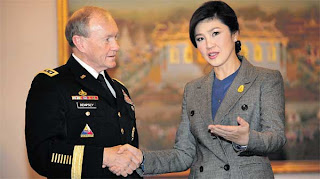 Thai governments are not above a little corruption, as a rule.

Gen Martin E Dempsey, chairman of the US Joint Chiefs of Staff, shakes hands with Prime Minister Yingluck Shinawatra during his visit to Government House yesterday. APICHART JINAKUL Gen Dempsey was speaking to reporters at the Royal Thai Armed Forces Headquarters where he met Supreme Commander Thanasak Patimapakorn yesterday. Nasa has asked the government and the army for permission to base aircraft being used in the study at the airport. Nasa’s website says the US space agency will conduct its Southeast Asia Composition, Cloud, Climate Coupling Regional Study in August and September, to “address key questions regarding the influence of Asian emissions on clouds, climate, and air quality as well as satellite observability of the system”. The agency said basing the aircraft in Thailand is optimal for achieving its scientific objectives, and the preferred location is U-Tapao.

The opposition Democrat Party says it is worried the Nasa project could have military objectives such as establishing a base in an attempt to counterbalance China’s growing influence in Southeast Asia. Gen Dempsey said the Pentagon had nothing to do with the Nasa study, as it is a civilian organisation. However, he said the US Defence Department was discussing with Gen Thanasak the possibility of establishing a Humanitarian and Disaster Relief Centre at U-Tapao. Gen Dempsey said his visit was to clarify remarks by US Defence Secretary Leon Panetta in Singapore on Sunday that the US is looking to re-establish closer military cooperation in the region. “The US intends to pay more attention to all relationships in the Asia-Pacific region because 10 years ago it was very busy elsewhere, but we are now coming back,” Gen Dempsey said.

<br >Foreign Minister Surapong Tovichakchaikul said the US wants to help countries with natural disasters. Security would be unaffected by Nasa’s proposal to use the airbase.<br >

<br >Sent in by R Zedinko. That’s his code name. He’s a journalist based in Bangkok who doesn’t like what he’s told to report.<br >

TAP – They’ve not killed any people in Asia for  a while.  That’s about to change.  They used to spray Agent Orange killing millions and deforming millions of babies.  Now they’ll be spraying Vietnam with Agent Chemtrail – killing more slowly than last time, but still the same objective – killing large numbers of human beings.