Hi Tap, I have been wasting my time sending comments into The D.M.
Here is just one on  a particular item that they would not Print, relating to our OLD FRIEND PETROL, because we still use it for an Outdated Technology ( 140 + years old, to keep The Parasite Banker in Luxury ).
The Production of The Electric AUTOMOBILE was stopped by them in The 1930’s – DO YOU REMEMBER THE ELECTRICALLY POWERD MILK FLOATS, they just disappeared off of our roads years ago.
They are Building WINDMILLS, when they should be Investigating  Electron Capture Technology
‘COLD FUSION’ , Lattice Assisted Nuclear Reaction “LANR” If you are interested  ( Main Site ), I wonder why that is then?
CAMERON’S FAMILY WERE INVOLVED WITH ‘WIND MILLS’ at one time, I don’t know if they still are. They need the myth of global warming for the propagation of these inefficient Alternative Energy Technologies, which are “NICE LITTLE EARNERS” It is possible that The Elite have this as a Working System Already, Just Ideal To POWER THEIR ‘DUMBS’ don’t you Think. DARPA seem to rate it. 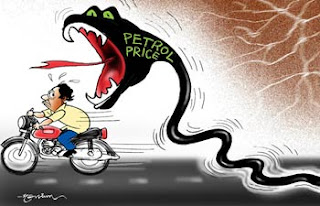 Motorists will almost certainly have to pay 3.02p more for their fuel at the pumps to help pay-off Britain’s debts, a senior minister has admitted.
Transport Secretary Justine Greening said she was not prepared to stand in the way of the rise in fuel duty expected to come into effect in August.
It means already cash-strapped families will have to fork out more than £1.40 a litre for petrol – most of which is tax.
The move also sparks fears that the country could see a repeat of fuel protests similar to those seen in September 2000 when petrol pumps ran dry during a series of rolling blockades on the country’s motorway networks.
Miss Greening she said wants to focus on pushing petrol companies to slash the cost of fuel at the pumps, to bring it in line with the falling cost of oil globally.
Former Treasury minister Miss Greening told the Daily Telegraph said: ‘The taxes that we get in fund the public services that we all rely on.
‘Surely it’s better to challenge the petrol retailers to pass on reductions to motorists and actually I think that’s probably the most important thing to do.’
At present, 57.95p is taken in fuel duty for every litre bought on diesel and unleaded. VAT adds another 20 per cent – around 24p at current prices.
If the fuel duty rise is rubber stamped, it will mean almost 61p out of every litre of bought will go in duty.
Fuel duty and VAT has kept petrol prices artificially high despite the falling cost of crude oil, although petrol prices have fallen this month by 4p for the second month running.
Also, today three supermarkets, Asda, Sainsbury’s and Tesco vowed to slash the price of fuel at the forecourt passing on savings to customers from falling oil prices. Miss Greening said it was important that the Treasury focus on cutting the deficit in light of what is happening to some countries in Europe. Ministers will be left to find £1.5billion to plug the income gap if the fuel duty rise is pulled.

PERHAPS SHE SHOULD READ YOUR BLOG Tap TO  GET UP TO SPEED..
Another one of my comments to the DM that never got Published :-
YOU ARE TAKING THE P155!
MONARCH PROGRAMMED PERHAPS?
IF YOU & YOUR COLLEAGUES, GOT OFF YOUR AR53′  & LOOKED INTO THE REAL REASON FOR THE DEBT, YOU WOULD KNOW, IT WAS AN ENGINEERED SET OF CIRCUMSTANCES,  SYNCHRONISTIC ONE MIGHT SAY. BUT THE CHANCES OF IT HAPPENING NATURALLY, ARE PROBABLY ‘ZILCH’
THE SAME HAPPENED IN THE 30’s .WITH THE BANKERS TAKING THE P155,
AS THEY ARE NOW.
When did we The British Public, the Electorate who you never represent, ask you  & your Cronies to Borrow vast sums of FIAT MONEY from The Central Banks, that we have to pay the interest on?
YOUR POLITICAL CAREER IS LIKELY TO BE SHORT LIVED, IF YOU ARE NOT VERY CAREFUL, AN INCREASE IN FUEL TAX, WILL HAVE A DOMINO EFFECT ON EVERY THING THAT REQUIRES TRANSPORT, OR HAVEN’T YOU THOUGHT OF THAT!
ECONOMICS FOLLOWS THE SAME LAWS AS THE NATURAL SCIENCES, IF YOU KNOW WHAT THEY ARE, THERMODYNAMIC MODELS ARE APPLICABLE, AS ALSO ARE ORDERS OF REACTION. & THEIR RESPECTIVE  RATES.
IF YOU WANT TO DO SOMETHING USEFUL GET US OUT OF THE EU.
IT IS RUN BY A BUNCH OF GANGSTERS, AS ARE THE HIGHER  STRATA, & THEIR RESPECTIVE , ECHELONS, viz The Bilderbergers, Committee of Rome, Fortune 500,Committee of 300, etc,  & The Pilgrims.
REGARDS  …………  WASP
The Tap Blog is a collective of like-minded researchers and writers who’ve joined forces to distribute information and voice opinions avoided by the world’s media.