By Steve Doughty / Mail Online – NHS doctors are prematurely ending the lives of thousands of elderly hospital patients because they are difficult to manage or to free up beds, a senior consultant claimed yesterday. Professor Patrick Pullicino said doctors had turned the use of a controversial ‘death pathway’ into the equivalent of euthanasia of the elderly. He claimed there was often a lack of clear evidence for initiating the Liverpool Care Pathway, a method of looking after terminally ill patients that is used in hospitals across the country. It is designed to come into force when doctors believe it is impossible for a patient to recover and death is imminent. 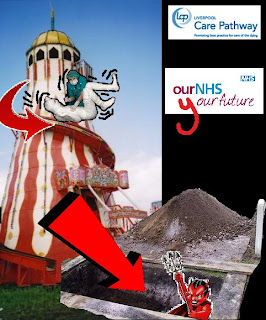 Utterly horrible. And not only confined to the elderly – a youngish friend who had an infection / fever would have died from lack of hydration had her husband not come in gangbusters, taking names and generally making it clear what would happen to them (legally) if they didn’t get a line in her NOW


TAP –    Local vicar, when I asked him if he knew about the depopulation agenda, told me he was surprised how so many of his parishioners who go into hospital die surprisingly quickly, when there didn’t appear to be very much wrong with them.