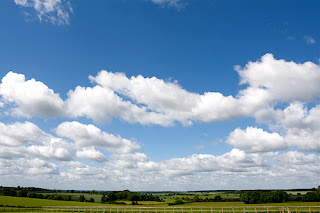 Remember skies like this – before the aerosol spraying started.  Clouds were distinct and separate from each other.  Blue meant blue.  The aerosols have whited the sky, merging clouds into one, making blue more white.  The heat of the sun doesn’t get through any more.


TAP context – I suggested the aerosol skies were blocking out the sun making the weather unseasonably cold.

My raspberries aren’t ripening either. And lots of slug attacks on the green leaf crops that I don’t normally get. I agree the chems are blocking out the sun. It’s affecting everyone even without the
poison factor (which I am never sure is the main factor anyway!).

TAP – Don’t underestimate the increase in respiratory troubles in kids.

JULIA –  I feel a bit homesick too, … homesick for nice weather and a more normal summer. It is hardly the best conditions to show off England! Will it pick up for the Olympics?
Comment from woken up – 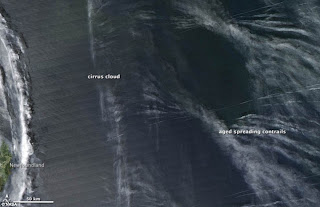 TAP The second picture from the Daily Mail’s article, claiming these are ‘contrails’ that have spread out.  These are chemtrails, not contrails.  They are changing our climate.  Their effect will
be to severely freeze us in the winter.


woken up –
I see they’re trying to ‘normalise’ chemtrails in the msm as they’re obviously getting too many people waking up.
This article says it’s all down to more aircraft flying around and is a good thing.
It doesn’t explain why a passenger jet would go around in circles or backtrack or criss cross the sky. Maybe the pilot had to go back for his sandwiches 😉
It also doesn’t explain why the aircraft never appear on planefinder etc. Or why aircraft flying at the same altitude emit the standar contrail that clears after a few seconds compared to the 24 hr spread of the chemtrail.

I saw a re make of ‘The Railway Children’ recently and they had gone to the trouble of adding chemtrails. Unbelievable.

TAP  The same as Julia saw in ‘The Man Who Fell To earth’ from 1976.  I wonder what winter be like if this is summer.  They didn’t get their Global Warming off the ground, so they rebranded the situation as Climate Change.  Now they’re changing the climate to fit the new narrative.


The BP Gulf undersea oil ‘spill’ is slowing the Gulf Stream.  The aerosol skies are blocking out the sun.  They are planning a massive freeze to justify their political program of Global Government.  That means people should be ready with clothes, fuel and insulation to cope with minus 20 degrees centigrade across Northern Europe.


See earlier post on the slowing Gulf Stream.  The BP Gulf oil spill disaster had all the hallmarks of a deliberate event.  There must be a plan to achieve massive climate change across Northern Europe, now being put into effect.  They don’t bugger about, these globalists.  It all fits together.

·  · about an hour ago near Miami, Queensland, Australia.·

11 Responses to “England’s Glorious Summer Is Absent. Wait For The Coming Ice Attack.”